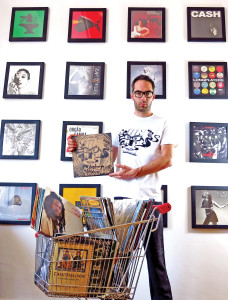 Glasses are trendy. It does not matter if they serve as a visual aid or only as an accessory. No matter if they come with an almost invisible frame or with big nerdy frames. Everyone is wearing a gadget on the nose nowadays. The unconventional models are very sought-after, of course. Zachary Tipton, the designer of frames made from recycled records, seems to have found the way to the heart of many fans –
everyday guys and film and music icons just the same.

He started out in his father’s garage on the idea that developed in the course of ten years into a growing business. Initially he had only a few dumped records that otherwise would have landed in the trash with which to build his own frames. 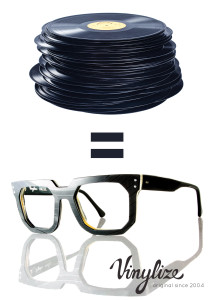 This is how he created his first glasses, and worked on perfecting his idea. Fifteen employees now work in the Tipton Eyeworks team, still creating frames for glasses from scrapped records based on Tipton’s original idea. The most important reason why he works with records is the recycling of materials. In the digital era the records have little use.
The recycling contributes to the protection of the environment and the material looks good – the grooves on the records are visible even after they were shaped, and they give the glasses a unique character.  “The more songs are on the record, the richer in details the surface will be,” Tipton tells us, while he pulls out different records from the covers.
He currently has a collection of 10,000 records in his office. Most of them are brought from Hungarian record stores because importing from abroad would cost too much. “Sometimes I find scrapped records from musicians that I like to listen to – in this case the records are put on my record player,” Tipton laughs, putting on a Gregory Isaac. “The worthier the music, the thicker the record, which makes the grooves also deeper.”
The Hungarian, who originally came from America, founded his brand in 2004 with his brother Zoltán. When in 2008 Tipton moved to Budapest for good, he began to increase production here – with success. He has made a breakthrough in these last few years and some prominent people are on his client list, such as Hungarian singer ByeAlex and international celebrities such as Elton John, Lenny Kravitz and Quentin Tarantino.
Which client would he especially like to “dress up”? He shrugs: “It’s a pity but most of them are already dead. Amy Winehouse would have been an honour, but well, yes…”
He remembers: “When we were just beginning to develop our business idea we were invited to Paris to exhibit our collection, to stand beside Gucci and Luis Vuitton. We felt honoured and we were surprised at the same time. It was a clear sign that we were going in the right direction.” Lately the team is thinking about new ways to put the vinyl into use: It could be lamps, cases for glasses or butterfly-shaped decorations. 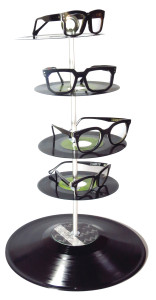 Currently there are 24 models in Tipton`s new collection. “We only have a few coloured designs because in the beginning there was not a lot of demand,” he explains, while holding a bright orange pair of sunglasses. “Vinyl is simply connected with black, and black suits our company.”
They sell about 500 glasses monthly to more than 20 countries. One pair costs HUF 55,000-85,000 and they produces all glasses with careful hand work and fit them to the individual customer: it does not matter if it’s a broken nose or an unusual head shape – the optician next door does not do that. A pair takes about a week to produce. Beside the normal glasses they also sell sunglasses.
A limited collection even has film built in the frames. “It’s a pity but we had to stop production because it was too expensive. The client wanted a specific scene from a James Bond movie and then we had to spend hours in the lab looking for the scene on the film roll. Nevertheless, the glasses sold very well.”