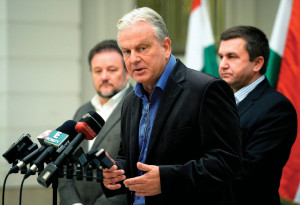 This year the national minimum wage agreement with the social partners went down quite smoothly: from this month the minimum is HUF 101,500 for unskilled workers and HUF 118,000 for skilled workers. The change concerns about 750,000 people.

It is a usual method in Hungary to determine a minimum wage independent of industry. The social partners and the government usually only discuss details, such as the ratio of minimum wage to the average gross salary, possible wage compensations for less competitive industries or whether the minimum should be subject to taxation. These are details, but very important details for the impacted workers.
The (neoliberal) arguments against the concept of minimum wage are well known, stating that it is an artificial intervention in the mechanisms that destroys workplaces, leads to closing down businesses and enhances the black market. Since the end of communism the ruling social-liberal governments between 1994 and 1998 and 2002 and 2010 have been standing up for these arguments.
In Hungary it was never the goal to completely abandon the institution of minimum wage; it has always been an unpopular topic for the governments. As an effect of the Bokros saving package introduced in spring 1995, the adjustment of the minimum wage to inflation was lagging so much behind that it only reached 28.8% of the average gross salary in 1998.
When the first Viktor Orbán government came into power, there were radical raises introduced (in 2001 it sprang by 57%) combined with the applying of income taxes on the minimum wage as well. In 2002 the minimum wage reached a top level at 40.8% of average gross salaries.
This Fidesz experiment was stopped when the socialists surprisingly won the elections in 2002: Prime minister Péter Medgyessy included in his 100-days program the abolition of income taxes on minimum wages and froze their nominal value. His successor, Ferenc Gyurcsány, set the minimum wage-gross salary ratio at 34.7%; Gordon Bajnai and his government aimed at crisis management and corrected this number slightly to 36.3%.
When Orbán founded his second government in 2010 he set the minimum at HUF 73,500. Fidesz set the ambitious goal that for eight hours labour at least HUF 100,000 shall be paid. Last year the agreement with the social partners did not reach this value but in 2014 the dream has become true.
As the average gross salaries for the complete year 2013 are not yet known, the most recent comparison is by taking into account 2012, when there was again a highly disputed rise of one fifth to HUF 93,000, reaching 41.7% of the average gross salary level. The intention of the Orbán government to raise the minimum wage to a relative high level is quite clearly demonstrated in these actions.
They are consequently following the concept begun at the turn of the century as well, by applying income taxes to minimum wage earners too. While the socialists counterbalanced the effect of the tax application with tax benefits for the recipients of minimum wage, Orbán simply scrapped this system.
He declared that they are willing to practise such social politics that will improve the taxpaying morale of workers, by forcing them “from above”. In order to keep the enforced increase of minimal wages from collapsing, there were some complementary measures that had to be introduced.
At the end of the 1990s Orbán’s policy gave among others the textile industry a last kick. His government operates through dictates (on the legal economy) today. The employers have to bear about three times the costs for a single workplace compared to the beginning of this legislation period, even if the worker is only getting half of that increase himself.
They are talking about an “expected increase in wages”, meaning: the companies should set their prices so that the reconstruction of the taxation system does not affect anyone negatively. This impacted many positions in the state-owned enterprises too, not mentioning the biggest part of the competitive sector, and there were negative and positive motivators used as well: the state took over part of the “wage compensation” and threatened with “wage commando”, meaning companies that do not comply will be punished by being excluded from open tenders.
This is all part of a bigger plan: while society is getting used to these changes, the serious side effects lose somewhat from their importance; especially if Orbán is using the growing sources from income taxation to fortify the effect of social redistribution. 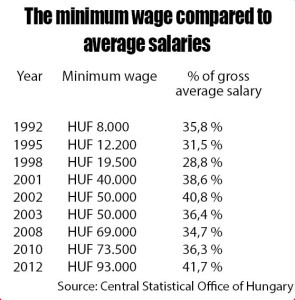 When someone is working for minimum wage, he is bringing home HUF 65,000 net, as long as we are talking about a single person. When you have children in the family, the amount can be several ten thousand forints higher thanks to the family taxation benefits. Companies are supported by the government through their action plan for the protection of workplaces that provide small discounts on the employers’ social contribution when they employ people under 25 or over 55 years old, permanent jobseekers or young mothers.
As you can see the problem is exceptionally complex. It is still quite clear that Viktor Orbán prefers to give priority to the well-being of married couples who are raising possibly many children with well-paid jobs. The minimum wage will always be rather only enough to live than to live a good life.