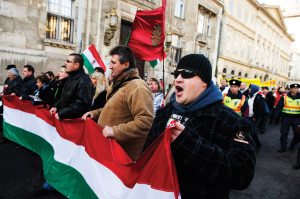 The decision of the Kúria prompted demonstrations by FX-victims.
(Photo: MTI ) 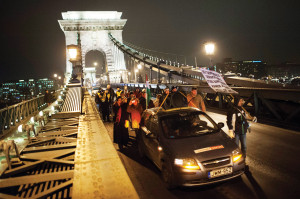 Banks cannot be held responsible for increasingly expensive foreign-currency mortgages due to changes in the exchange rate, Hungary’s Supreme Court, the Kúria, said in December. Lending in foreign currency and related contracts are legal, and the client should bear the risks related to exchange-rate fluctuations, the court said.

Clients took out loans with better conditions than those applicable to forint loans at the time, so they should bear the risks involved, the head of the Kúria’s civil department, György Wellmann, said after the ruling, whose purpose is to provide guidance to the lower courts. He added that the damaging consequences of economic and social problems linked to lawsuits filed by FX borrowers against the banks cannot be addressed purely by legal means, and the solution cannot be expected from the courts.
Prime Minister Viktor Orbán had urged the Kúria to rule on the issue of troubled forex debtors to ensure legal consistency.  Orbán said rulings in such cases had been controversial and he insisted that “people cannot be put in a situation in which the government introduces a legal solution before the courts pass opposing decisions, which create legal chaos”.
Hungary’s highest court has taken the side of banks, Antal Rogán, head of the parliamentary group of the ruling Fidesz party, told a press conference. The opposition Socialists said there were no further reasons to put off measures planned to help mortgage holders. Party MP Gábor Simon said the issue was not solely a legal one but had complex social and economic dimensions.
The radical nationalist Jobbik party said the court ruling had sacrificed the Hungarian population to the will of the banks. The opposition E14-PM party said that now the government should stop kicking the problem further down the road and solve the situation in line with the rule of law. 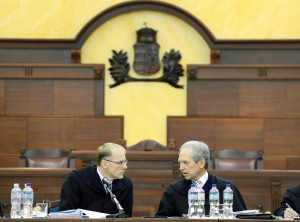 Kúria chief Péter Darák and György Wellmann, the head of the court’s civil college in conversation prior to the ruling.
(Photo: MTI)

Banking Association secretary general Levente Kovács said the ruling proved banks had been “in the right all along”. Kovács told state news agency MTI after the decision that banks would follow the court ruling “to the letter”. He said the Kúria had solved many unresolved issues and legal loopholes, and had ruled that foreign-currency contracts are “live and legal”, which must be respected. Kovács added that, at the same time, the banking sector understands the social difficulties which lie behind these contracts and will help alleviate these strains.
Péter Darák, the court’s chief judge, told MTI: “The Kúria has tried to do all it can for troubled mortgage holders but the courts have limited means to manage serious social and economic problems.” Contracts can be changed in one of three ways, Darák said. Lenders and borrowers can strike new deals, the courts can rule in individual disputes, or MPs can rewrite the law.
Currently, limited legal means exist in Hungary to tackle this problem, partly due to a lack of relevant regulations and partly because of a dearth of precedents in such cases, he said. The Kúria’s recent ruling, which serves as guidance to the lower courts, is not the only influence on the thousands of ongoing cases, Darák noted, adding that there remains an open case at the Luxembourg-based European Court of Justice.
Fidesz believes that the Kúria should decide on the unilateral forex loan amendments and the issue of the exchange-rate difference rather than wait for the European Court of Justice, Lajos Kósa, deputy leader of Fidesz, said. Kósa noted that the Kúria decided foreign-exchange loan contracts were not unlawful, but turned to the European Court of Justice on the issue of unilateral contract amendment and the exchange-rate difference. The politician called this a “cowardly move”, which only favours the banks.
Orbán waited a few days before voicing his opinion. “This demonstrates that the top court took the side of banks,” he said. “As there are plenty of those taking the side of banks, we will remain on the side of the people.”
The prime minister said he agreed with those who urge the Kúria to rule without delay about the legality of banks’ use of exchange-rate margins and their unilateral decisions changing the interest rates. “We are expecting a position about the legality of these practices and as soon as this is available, there will be a clear situation from the point of law and then we can take the necessary steps”.
Orbán declined to reveal what steps are planned and added that it is too early to discuss this issue. “Until then, I advise all Hungarian citizens to enter the exchange-rate cap scheme… regardless of what legal disputes are still under way.”
According to Central Bank Governor György Matolcsy, the problems of foreign-currency borrowers should be solved by legal means, through retroactive legislation. He said a breakthrough has not been achieved regarding helping troubled forex borrowers, despite a positive turn in the economy in 2013. “The ruling will be respected, though disliked. The Central Bank is unchanged in its opinion that foreign-currency loans were an economically bad product, which came about as a result of bad economic policy,” said Matolcsy, adding that unilateral changes to contracts are both morally and economically unacceptable.
It did not take long for Fidesz to get back on the issue once the holidays were over. “It is likely that Parliament will have to take action in connection with the issue of FX mortgages, given that the government did not receive the legal assistance it had sought from the Kúria,” Fidesz spokesman Péter Hoppál told state-run television channel MTV on Monday. More than half a million mortgage holders still need help, he added.
Over the last weekend Justice Minister Tibor Navracsics noted that he regards the most important statement by the Kúria that broad social problems such as the FX loan issue should not be handled exclusively in a judicial setting. Navracsics said that in the summer the government had his ministry review the various legal possibilities for solving the problem of troubled debtors. “Several options have been considered and, in case of need, these will be implemented,” he said.