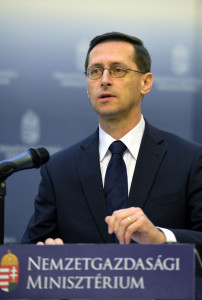 The first “message bomb” from the Central Statistical Agency (KSH) in the new year was the news about there being four million active workers. This will contribute to building more stable economic growth.

Minister of National Economics Mihály Varga sees a blooming landscape in 2014 wherever he looks. The way he sees it, the government has restored the macroeconomic balance and created the conditions for growth. An illusion? Or maybe he is just lost, like the snowflakes in the mild winter.
Economic growth is still far from the 4-5% that Varga’s predecessor, György Matolcsy, now president of the National Bank, predicted. The fact that it was only 1.8% in the third quarter of 2013 can even be viewed as a success given the current circumstances (weak European economy and lots of bottlenecks in local economic policy). If this speed can be kept up, the current government forecast of 2% GDP growth for 2014 can become reality.
It’s easier to win the battle on the inflation front. The inflation rate sank in autumn below a record value of 0.9%, which rids Hungary of its title as an EU price leader. However, the country is facing a new danger: too low inflation. We should not fear its side effects though, according to Varga. He should be right about this, because consumer prices have been manipulated so massively by the government in the last months, as though they wanted to redefine market economy (keywords: politics of the declining utility costs).
The positive side effect is that real wages are rising in a noticeable way for the first time in ages. Hungarian employees can keep about 5% more than a year before from their net wages. And the mass of people who earn more continues to grow: for the timeframe of September-November 2013 the KSH shared (for the first time since 2011) a report about more than four million workers, so the employment rate is almost at 60%.
This will make private consumption the most important factor of growth in 2014. The economic sector is certainly not disturbed by the fact that these statistics include 200,000 people who are sent by the state as job-creation forces into heated classrooms for the wintertime and furthermore an estimated 200,000 Hungarians who chose to try their luck abroad.
The challenge of the budget deficit for this government – as we should already have learnt in 2010 – is in fact no challenge. Prime Minister Viktor Orbán had declared that the termination of the excessive deficit proceedings in Brussels against Hungary was a top priority, and decided to fight this battle himself the previous year. How did he fight it, since in the meantime the country had to pay a record HUF 1,300 billion in interest in 2013? With all kinds of new and raised taxes; in terms of imposing taxes and duties, the Hungarians are no doubt world leaders.