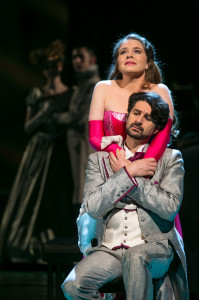 Staged in a dreamscape set in Russia over 100 years ago, the world premiere of the contemporary Hungarian opera Spiritisti, by György Selmeczi, took place at the Hungarian State Opera on Sunday.

Through his new opera, Selmeczi seeks to explore the “infinite power of women, in the contrast between the Russian temperament of the East and the Mediterranean temperament of the West, and the inevitability of tragedy”.
Capturing the essence of Strindberg’s A Dream Play inspired by the music of Puccini, Verdi and elements of Korngold, Spiritisti is a throwback to another age.
The only contemporary element to this 21st-century opera is the abstract symbolism rooted in its hazy storyline. Opening with a dream-like sequence set to a fusion of a light-hearted operetta and vaudeville style with Puccini outtakes, the male characters conduct a séance with the Russian duke, conjuring up the spirit of the “woman”, played by soprano Polina Pasztircsák, the only female role in the opera, in the role of Colombina.
After a sequence of special effects flashing a female image in strobe lighting across the stage, the net box is lifted to reveal another orchestra sitting at stage centre as the dancers whirl into the ball, along with its main cast, most of whomare based on the Commedia dell’arte.
The production’s staging is effective, capturing the dreamy elements central to the opera’s concept with a dash of misplaced realism. Visually the production is stunning but it is inconsistent in its portrayal of a dream world. It’s never clear what is real and what is fantasy – or who the point-of-view character is.
The scene is a flashback to another era, when Colombina is engaged to Pierrot before she falls under the romantic spell of Arlecchino, only to end the act in the arms of the Russian duke. Colombina is set up as generalised into trope symbolising all women, rather than as a single developed character.
The first act mixes up scenes echoing La Traviata with Chekhovian characters, complete with Russian folk dancing and the occasional comic relief in the manner of a peep-show puppet theatre.
The second act continues at the palace ball, and it becomes clear the entire opera can be thought of as one continuous scene weaving in and out of the real world and the symbolic spiritist one.
An opera production is staged at the whim of the duke, who asks the performers, depicted by Colombina, Pierrot and Arlecchino, to redraft its ending to end on a happy note to his satisfaction. The players give the opera a light-hearted climax but the joy is cut short when Desiré, a disillusioned poet resembling a character from a Dostoyevsky novel, tormented by his love for Colombina, shoots the object of his affection from the audience, rendering the second half of the show into a deconstructed and reconstructed redux of Pagliacci.
The figures of the duke and Desiré are left alone to mourn Colombina, who is more of an allegory representing their lost hopes than a real woman. The cycle begins again as the spiritists gather once more to indulge in another séance, generating an endless loop where the characters relive their sins, passions and jealousies.
While Spiritisti attempts to discuss the devastating power of love, desire and passion from the male perspective, it comes across as being a nostalgic medley of work from the 19th century with little reflection upon the modern era. There is nothing about Spiritisti that makes it the spirit of its age, nor is it written with the modern audience in mind. The music feels borrowed from other composers, emulating the surreal world of Die Töte Stadt by Korngold with Puccini arias but lacking a defined narrative.
Considering the opera is a Hungarian composition set in Russia, the use of the Italian libretto is distracting and its motive is not explained. Perhaps it’s a deliberate move to blend into the mystery of the opera’s abstract and seemingly allegorical storyline.
The production itself is lavish and its cast should be highly applauded.  Baritone Krisztián Cser made a stellar performance as the Duke, and soprano Polina Pasztircsák also stole the show as Colombina, with her enigmatic stage presence and clear, lyrical vocalism.
Spiritisti is a modern opera that backlashes against the avant-garde productions of its contemporaries. It’s a safe conservative production that won’t shock or offend, but its ideas are ones that have been expressed over again through other artistic mediums over a century ago.