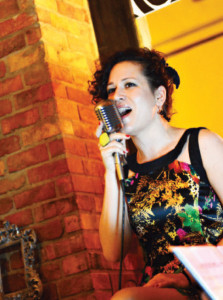 There is no business like show business: so hard and cruel and yet so addictive. Sofia Balogh has been fighting for her career as a belly dancer and singer for years. The young Hungarian tried her luck in Cairo, the centre of oriental dance, and despaired at the patriarchal society and bureaucracy of Egypt. She put her hopes in the Arab spring only to see them crash. However, she never gave up her dream.

Balogh is a modest artist. She appears at the interview without make-up and orders tea. I don’t drink coffee, she says. Alcohol neither. She does not smoke and follows a vegan diet. It used to be different: the 29-year-old has experienced much in the past years, and that makes you a different person at the end. As opposed to many other artists she is not an extroverted person in her private life, rather almost timid. It still seems that she is happy to tell her story.
Balogh grew up in Veszprém and led a “safe middle-class” life there, as she describes it. After finishing media and mass-communication studies she moved to Budapest in 2007, to begin a career in the film industry. However, when she received an offer to go to Greece to work as a belly dancer, she just said yes. “I began belly dancing at school already,” she says. “It was a hobby and I never thought of it as a possible career.” 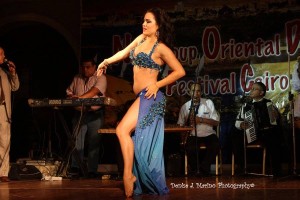 This is where the love story with Egypt began
(Photo: Denise Marino)

But the world of belly dancing was not half as glamorous as she imagined. She danced every night in an oriental café in Crete for nine months, to the point of exhaustion with sore feet. “I arrived there with sparkling eyes. You would think that people would love the art because you put your heart into it. Then when the first drunk steps on your beautiful silk veil, you are devastated.”
She learned to tolerate much and keep smiling. “I got a lot stronger during this period. Yet at some point I just felt burnt out.” The constant pressure to look good, the drunk men who thought that just because she was a dancer and from Eastern Europe she could be easily had – at some point she could not take it any more. She saved money and sold some of her belly dance costumes. With the money she travelled to Cairo.

A woman alone in Egypt

Balogh’s love for Egypt came from a previous visit to the Nile Group Festival in Cairo, the largest oriental dance festival in the world. She knew only the music and the dance and she was curious about the Arabian culture and people. However, the reality destroyed one of her illusions again: as a single woman and in addition a dancer, she had no chance in the male-dominated Egyptian society.
She understood quickly that without an agent and with only a tourist visa she would not be able to work. “The Egyptians have a unique attitude towards oriental dance. On one hand they are proud about this side of their culture, and on the other hand they are very conservative and do not see the dance as culture but rather as entertainment. The fact that women use it to earn money and show their body during the dance brings it on the same level with prostitution.” There was only one possibility for her to get a job: marriage. She laughs when she recalls that memory: “Yes I was married. That is the craziest part of my life.” Nothing else bound her to her husband than a piece of paper. They had agreed that the relationship would be purely for convenience but still he began to control and manipulate her.
She rebelled and demanded a divorce after one month. The process lasted three years and three months, “because I initiated the divorce as a woman, without his consent”.
She stayed altogether one year in Egypt. She did not manage to overcome the challenges of bureaucracy and get the necessary papers. At some point she had neither money nor energy any more so she gave up and moved back to Hungary. “I wanted to forget my dream. I simply did not want to hear oriental music any more,” she remembers. 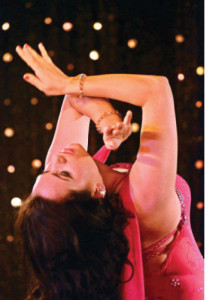 The shadows of the revolution

She discovered a new passion in Budapest: singing. She went to a musical school and attended courses for two years. In 2010 she began work as a marketing specialist for the hostel Casa de la Musica in District VIII. She kept visiting her friends in Egypt, including in January 2011. Only a few days after she arrived the revolution broke out in Cairo and her return flight was cancelled, stranding her in the middle of events.
She let the euphoria take her over: “I joined the political activity and went several times to Tahrir Square.” She stayed in Egypt until the resignation of president Mubarak, and she did not want to let go what she had experienced once she returned to Hungary. In October 2011 she moved back to Egypt to accept a job as a singer.
“Looking back at it, it was a crazy idea,” she thinks. Due to the revolution, tourists did not come. In addition it was always more and more dangerous to go alone on the street. There were a lot of kidnaps and rapes. Groups of men moved in the city and attacked women – and as a singer Balogh had to go out at night alone in her costume and make-up.
“I was constantly living in fear.”  She was attacked twice and only narrowly escaped thanks to big luck. In 2013 she turned her back on Egypt for good, disappointed and traumatised by the violence. “I have been trying to understand ever since how these tendencies arise in a society. I am reading a lot of feminist literature. We think that in the West everything is better but here you can still see the traces of the patriarchal system.” 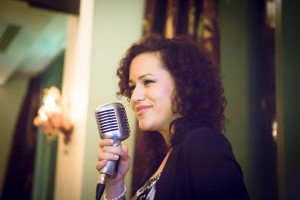 The dream lives on

Be defeated and begin again – this is the rhythm of life for Sofia Balogh. At the moment she is trying to establish a career as an artist in Budapest and performs in a duo with jazz pianist Dezső Oláh. “Jazz and oriental dance are similar in a way that you only have to learn the structure and you can improvise after that. Maybe this is something that makes it interesting to me.”
Still, to make a living as a freelance artist is hard. She is persistent but says she is gradually losing hope. The desire to travel again is growing, this time maybe to Asia – for sure to a country where a woman can be safe.
Still, a “normal” job is out of the question. “An office job would kill me. I always have to do something that I like.”