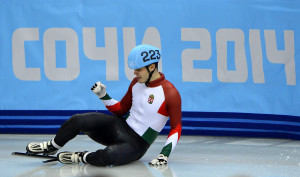 The most expensive Olympic Games ever are under way, and shockingly the Hungarian state television (MTV) is far from being up to the task. Hungarians living across the border are complaining that they are unable to watch the broadcasts because MTV only purchased the right for transmissions within the border. This is perfectly understandable – Hungarian athletes are among the best in the world in a number of sports, but these have one thing in common: none of them are on the schedule of the Winter Olympics. So Hungarians elsewhere need to watch the athletes on the broadcaster of their respective country. And they are better off. In the very little time MTV has allocated for Olympic transmission, they manage to make mistake after mistake. Just a few from the first two days: during the men’s 10km biathlon event when Norway’s Ole Einar Bjorndalen was about to become the oldest champion of the Winter Games, and competitors were still out on the course, MTV decided that the perfect time to interview the father of Hungary’s Károly Gombos – who finished 79th in a group of 87 – had arrived. That’s OK though, right? After all it’s the Hungarian state television and Hungarian athletes should be important. Wrong. The next day there were two competitions in which Hungarians had an outside chance to finish in the top six and get Olympic points: short track speed skating and women’s combined alpine skating. Neither was broadcast live. During the biggest alpine skiing event – men’s downhill – the network missed two racers because it went to commercials right after the designated commercial break of the event. So it seems that foreign competitors are not important either. But then why broadcast the Games in the first place?