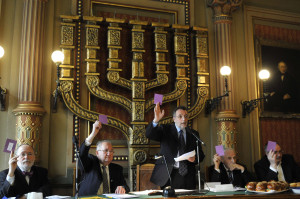 Imagine the White House chief of staff stating the following at a press conference after a significant meeting about a highly controversial issue with the leading representatives of American Jewry: “The President will address all of our fellow Americans as well as our Jewish citizens next week.” It does not take a lot of imagination to envision the firestorm of criticism that would follow such a division of the American people into real Americans versus Jewish citizens of America.

David Mandler holds a Ph.D. in English from New York University and teaches English at Stuyvesant High School in New York City. His latest short story “The Loft” is available through amazon.com. Read more from him at drmandler.wordpress.com.