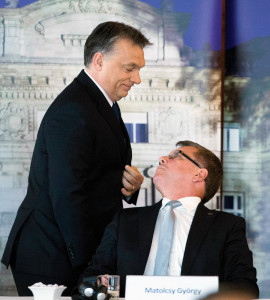 The very few people in Hungary who receive their salary in euros said thank-you, the hundreds of thousands who have foreign-currency-denominated loans breathed a something-else-you, when the central bank announced this week it had cut the base rate by 15 points, higher than the market consensus of a reduction of 5-10 basis points. In response the Hungarian currency started dropping and went all the way to 313 against the euro. As usual in this country, “experts” on the left quickly blamed National Bank governor György Matolcsy’s stubbornness, while the other side was pointing to the situation in Ukraine and the unfavourable international conditions. Before the decision of the Monetary Council – oh, who are we kidding? We mean the decision of Matolcsy – even National Economy Minister Mihály Varga cautioned the central bank that the 2014 budget had been drafted assuming a HUF/EUR exchange rate of below 300, adding that he hoped rate setters would make a responsible decision later in the day. It is doubtful that Varga had this in mind when he was talking about a “responsible decision”. Following the words of the minister, the rate cut – or rather the size of it – caused such a surprise that conspiracy theories started to spread about Matolcsy making decisions irrespective of what is being suggested to him from the top of the food chain. Not that one shouldn’t be a supporter of an independent National Bank, but Lord help us if that’s the case. The last thing this recovering country needs is a György Matolcsy on the loose.