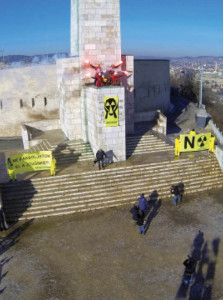 It’s been a month since Prime Minister Viktor Orbán made a surprising flight to Moscow. He came back with an agreement that will determine, like no other, the future of Hungary’s economic history and energy politics for several decades. The “Paks pact”, as it has become known, brings up many questions. Environmental activist Ada Ámon, the chairwoman of the NGO Energiaklub, is searching for answers.

The expansion of the Paks nuclear plant was already decided in 2009 under prime minister Ferenc Gyurcsány (2004-2009), says Ámon to open our conversation. The decision had also been supported by Fidesz, however, then in opposition. “The Parliament practically gave a blank cheque for all future nuclear power plant projects, since there was nothing concrete officially set down in writing,” she says. “The text left an unbelievable amount of room for interpretation.”
One of the fundamental questions left open was who should be responsible for an eventual expansion of nuclear power plants: Parliament or the state power company MVM. Over the years, the view that it fell within the purview of the power company was pushed through. “That’s at least what we thought,” says Ámon.
At the beginning of the year it was still assumed that the Paks 2 project would be settled through a public call for tenders, “as it’s supposed to be done”. In mid-January, when it became known that Orbán was not returning to Budapest from Switzerland but heading off to Moscow, it became clear that there wouldn’t be any tenders.
“Since then the government propaganda flows over every channel, saying it’s the ‘deal of the century.’ What exactly that should mean, we really don’t know,” explains Ámon.
A video on the opinion portal 444 shows that Energiaklub isn’t alone in this. In it, video reporters seek answers from members of the governing Fidesz-KDNP – without success. One of the most telling incidents occurs when an old parliamentarian with snow-white hair rushes past a reporter at astonishing speed, despite his age, and to the question “Should the Paks 2 agreement be appraised positively?” merely replies “I don’t know”.
A second question is asked and the answer is informative, but not in connection with the planned nuclear plant expansion. The reporter asks, “Is it possible that you will vote ‘no’ then?”, and receives a decided “ No, it isn’t possible. Our parliamentary faction will decide.” 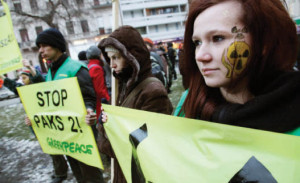 There were actually two decisions concerning Paks 2. First in 2009, when under the Gyurcsány government the legal foundation was laid. Then in 2011, when the law was revised and Parliament was de facto excluded from all questions in relation to the expansion. It’s interesting to note that in both cases Fidesz and the MSZP were able to cooperate. Concretely, the opposition Fidesz voted in favour in 2009 while in 2011 the MSZP, now in opposition, gave its approval to changing the law.
“That’s why the criticism coming from the MSZP is unconvincing,” says Ámon. When it comes to searching for alternatives, she sees the only reliable representative in the LMP. “Actually,” she says, “the other parties are only jealous because they weren’t the ones to conclude this agreement.”
Ámon suspects even more might lie behind this rare expression of unanimity: “Fidesz and MSZP have never been able to work together. The investigations in the run-up were often unnecessary, expensive and simple ‘copy and paste’ reports that didn’t bring any new findings. And nonetheless both parties voted in favour while in opposition.”
Presumably it’s simply a matter of the immense amounts of money involved, “since whenever there is no discussion or parliamentary control concerning such a project, and everything goes as smoothly as a knife through butter, then something isn’t right”. The economist Ámon is particularly irritated by the slogan “deal of the century”: “It’s simply not clear to me who this deal is supposed to benefit. Objectively, there is no discernible benefit.” 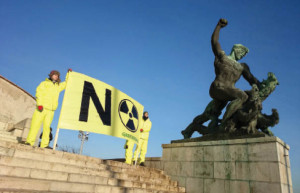 War of the numbers

“If you consider the facts, one in particular jumps out: repaying the Russian loan will cost the state a significant amount of money, whereas the financing and development of alternative sources of energy through a levy on electricity bills wouldn’t give rise to any additional costs. So where is the benefit then?” asks Ámon.
Since the announcement of the agreement, numbers are flying around that are almost beyond comprehension: EUR 10 billion, that means HUF 3,000 billion, is the amount that the Hungarian state will be indebting itself for the expansion of Paks 2. The agreement also states, “it is hoped that some 40 percent of the investment sum will benefit Hungarian firms through orders and services rendered”.
Ámon considers this estimate realistic. “In Hungary there is neither the know-how nor the technical preconditions for the entire reactor project.” But this doesn’t mean that all of the costs are covered. “Paks 1 will remain operational until 2037 but Paks 2 will be up and running about 15 years earlier. There will be unavoidable problems with the infrastructure.”
The cost of administration, transformers and cooling systems has not yet been taken into consideration. Energy experts do not expect these additional costs to be enormously high, however, but over time an extension of the network and maintenance work will also be required. Energiaklub does not expect EUR 10 billion to be the final amount.
No one knows exactly what amount this “deal of the century” will be based on. The government is keeping silent and letting itself get carried away with vague clichés. Minister of National Economy Mihály Varga, in charge of providing information on the project and one of its main supporters, was nonetheless unable to help clear up some of the most urgent questions. To the accusation that the agreement is a kind of blank cheque, he reacted evasively: “This is true insofar as the agreement could end up being even more favourable than assumed.”
Assumptions are all that critics and journalists have to work with, since the figures and calculations on which the decision rests will be sealed up for ten years. The NGO TASZ, together with Energiaklub, is sueing for disclosure of the data. “Legally we are in the right but that does not mean the court will rule in our favour,” says Ámon.
She is sure that many parliamentarians are not clear about the importance of the sums they are deciding on. “To give only one example: every year, the interest on the loan will swallow up as much as Hungary is currently investing in its universities and colleges.” Or another: “in Hungary there are about 3.8 million households. Even before its first day of operations, the project will cost each of them about one million forint. It doesn’t even seem to disturb anyone that with this mountain of debt the national conservative government will be exceeding the debt ceiling that it inscribed in the Constitution”. Instead, there are those in government circles who argue that this wouldn’t be unconstitutional, since by the time of repayment the economy will have recovered significantly. And Paks 2 would have the added advantage that surplus energy could be sold to neighbouring countries, particularly Germany. This statement should be treated with caution. When one takes a look at Hungary’s neighbours it becomes clear that many have had this idea before.

Despite all the joy on the side of the authorities, the propaganda doesn’t quite seem to be catching on. Former American presidential candidate John McCain, hardly a “green” liberal, stated his concern about the “Paks pact”. A look at the opinion polls gives an even clearer idea. A representative survey ordered by state news agency MTI found that 56% of those polled did not like the fact that Paks 2 would be realised using Russian credit and primarily by Russian companies. Another number that should make the government think twice: 74% of respondents said they would prefer renewable sources of energy if the choice were left to them.
Ámon does not want to give up hope: “The government is accusing us of sowing hatred and discord among people but we only want people to inform themselves. The Paks 2 project can still be stopped but only if people stand together.”
Currently it seems difficult to organise protests, however. Besides calls for demonstrations, the 11 NGOs behind the homepage www.pakskontroll.hu are urging supporters to send e-mails to their MP and share their opinion. “Our IP-address has already been blocked for a few days, and most recently the word “Paks” is blocked as well,” says Ámon. “E-mails with this word don’t get through any more.”
She sees in this highly unusual occurrence both an intervention into freedom of opinion and a sign of the government’s insecurity. “The government is showing everyone that they are not ready to deal with this issue in a civilised way, that it’s clear to them Paks 2 would not stand up to public scrutiny.”