Finally! A contemporary Hungarian restaurant has opened in the heart of Budapest. Many have been waiting impatiently for this in the Hungarian capital – tourists, expats – and not least the Budapesters themselves. And although this isn’tcompletely new, Bruno & Bruno provides a couple of surprises to the taste-buds, making repeated visits worthwhile.

Bruno & Bruno has found a place just below the Hegyvitéki Mall at Apor Vilmos tér. Through the wide glass it is visible from the outside that this is not a “kifözde” or “étkedz”’, one of these charming little places wallpapered with grease stains. Instead, the modern, tasteful interior and the attentive service hints at the standards Bruno & Bruno sets itself. This is not surprising, seeing that restaurant owner Zoltán Herczeg was equally in charge of the “67 étterem” in Székesfehérvár’, a place whose great reputation had already reached Budapest a while ago. And all those for whom the idea of having dinner on the Buda side threatens to be a bashful affair due to the prices that dominate there, can be reassured. Although fine dining is on the agenda, Bruno & Bruno displays neither in terms of atmosphere nor in terms of prices remoteness from our budgets.
On top of that, online magazine We love Budapest recently proclaimed after an evening in the restaurant that “We found the best Schnitzel in town”’. As Schnitzel does not normally feature as a culinary highlight in quality cuisine, my dinner companion and myself were in joyful anticipation of a trip to the restaurant. 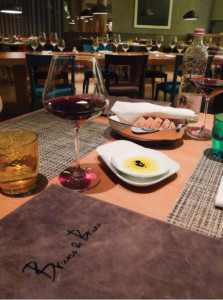 Despite its reputation, the Buda side is rather rarely equipped in terms of high-quality restaurants, and chef Davíd Kugyela agrees. The kitchen master has cooked on the Jersey islands before, and his encounter with Herczeg was accidental. “Zoli has very high standards with regards to the quality of the groceries in the restaurant,” Kugyela agrees. “The meat is delivered by a butcher we trust very much, the ingredients are fresh and neither genetically or hormone manipulated food nor food additives can be found here.”
The freshness and thoroughness applied at Bruno & Bruno can be tasted as early as having a first bite of the appetising home-made bread, served with olive oil and drops of Balsamic vinegar, while supporting the 2011 Pinot Noir from Pannonhalma to our satisfaction.
The following starter, bean cream soup with cubes of fried, smoked pork neck, used to be the favourite dish of Hungarian writer Mór Jókai. During his lifetime in the 19th century, he certainly could not have anticipated how skilfully this traditional Hungarian dish would be prepared in Bruno & Bruno.
Due to the meticulously finalised consistency of a mixture between soup and foam produced in the thermo shaker, the bean, often denounced as heavy and filling, instead turns out to be a rich but equally easily digestible foundation, thus defying its unjust reputation. The sour cream, applied on the surface in a square pattern, provides the neutral counterbalance – and is at the same time another essential of Hungarian cuisine.
We are furthermore ensured by the waiter that neither microwaves nor deep fryers come into operation in this restaurant – a piece of information the advantage of which I have yet to figure out. 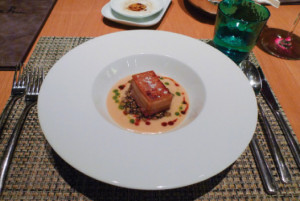 The main course, always the most anticipated dish of any menu, consists of pork loin out of Hungary’s animal embodiment of a Hungarikum – the “Mangalica” pig, served with bull’s eyes beans, purée of celery, spinach as well as a fried potato tower, comprised of the wafer-thin cut, stacked potato slices. As heterogeneous as the selection of ingredients may seem, the dish nonetheless succeeds in creating a soothing harmony of both taste and consistency.
The most pleasant surprise however, both in terms of taste and aesthetics, is this time the dessert: The curd cheese dumpling “Mont Blanc” comes surrounded by sour cream foam and constitutes a sight equally optically stimulating as Europe’s highest mountain itself. Although the heavenly, freshly made and still slightly warm curd cheese dumpling is served covered in an excessively applied pile of powdered sugar, once cleared off the sweet snow, the interior of the summit can be savoured – it does not disappoint.
The dessert manages to capture all the qualities of Bruno & Bruno in itself: the menu satisfies mainly fans of the richness of Hungarian cuisine, whilst preparation and presentation of the dishes happens with French finesse. The result is a well-rounded, accessible concept that even Mór Jókai might be happy with. 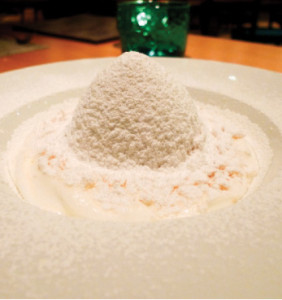