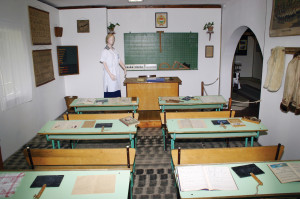 Memento of a time when teachers did not need a portfolio

Teachers have two months left for creating and uploading their portfolio to an online database if they want higher wages from January 2015. Of the almost 26,000 teachers affected, only 8,000 are registered so far on the database. A group of educators, including well-known and successful teachers, have declared that they are unwilling to bow to the new system and won’t make or submit their portfolios, even if it means they will probably remain in the lowest category.