Hungary’s economy grew by 1.2% last year, the Central Statistical Office said. The government must be pleased that those who ridiculed Hungary yesterday might envy it tomorrow.

The Central Statistical Office has reported that Hungary’s Gross Domestic Product (GDP) grew in the fourth quarter of 2013, to its highest in eight years at 2.7%. Adjusting for seasonal differences, overall growth last year amounted to 1.2% (see P14 for the EU-projection). “We are again among the leaders,” National Economy Minister Mihály Varga concluded from the fourth-quarter figures, pointing out that the country now had the fourth-highest growth rate in the 28-member European Union.
Hungary was one of the engines of European growth until 2002-3, before gradually losing its position under the Socialist-Liberal governments and turning in the opposite direction. Over the past three years the country has taken a path that appears very promising, says Varga. The budget deficit is stable at under 3% of GDP, national debt is shrinking and the balance of trade and payments are in surplus, he says. The country no longer has to battle with structural problems; instead it has built up growth reserves. 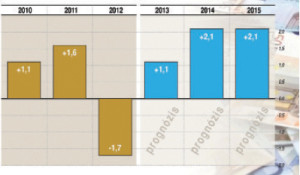 Mr. Varga’s boss must also know something about this: during his trip to China this month, Prime Minister Viktor Orbán did a bit of advertising for Hungary, touting it as a solid investment opportunity with strong growth potential. By 2016 growth should reach 4%, he said. Varga is more circumspect because such potential is dependent on the performance of the German economy; it is well known that Hungary is linked to the German economy and its export performance by a thousand ties. At least there are grounds for optimism that the tax reforms carried out by the government are stimulating the labour market.
When considering growth prospects, the question of sustainability must always be posed. The economic boom that took place at the beginning of the new millennium was artificially fuelled by the unbridled allocation of credit; after the bubble burst, Hungary’s adjustment crisis deepened. Back then, the Orbán government couldn’t be regarded as a master of growth: its first time in office (1998-2002) began just as Hungary was in its best condition, following the strong medicine provided by the Bokros package of 1995. When György Matolcsy was economy minister he could never even come close to realising his dream of 7% growth.
Just as before, Matolcsy is convinced that the state must play an active role in times of crisis, like today with the Széchenyi plan. But of the 10-15% cumulative growth that he promised for 2010-14, only 5% has so far been achieved.
There are reliable sources from which we can estimate growth prospects for 2014: the current consensus among analysts predicts 1.5-2.5%, based on improving conditions in Germany and the rest of the EU, the state of reserves in industry and construction, investment figures that will, perhaps, no longer be supported exclusively through EU money and rising real wages leading to better retail sales.