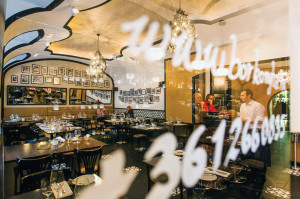 Restaurants go above and beyond call of duty

A Budapest restaurant has received the Michelin star and one has been awarded the Bib Gourmand designation, the website diningguide.hu says. Borkonyha in the centre of Budapest was awarded the star for its delicious food and a personal and relaxed service. The Michelin Guide’s Main Cities of Europe said Borkonyha was a “bustling wine-orientated restaurant close to the Basilica. The fortnightly menu features well-executed dishes with an elaborate modern style and subtle Hungarian influences. Top ingredients are sourced from the surrounding countries. Forty-eight of the 200 wines are offered by the glass; many are from local producers”. The website’s food choices were Szilvásváradi trout with sun-dried tomatoes and shallots in red wine, mangalica variations and the tarragon mousse with sweet crumbs and pumpkin. Déryné in Buda’s District I won the Bib Gourmand, while the restaurants Bock Bisztró, Vár: A Speiz and Arcade Bistro lost the prize, the website said. The Bib Gourmand designation denotes good cuisine at a reasonable price with two courses and a glass of wine or dessert costing less than USD 40 (HUF 9,000).

Several dozen young Hungarian prostitutes, some of them hardly older than 18, had been abused by their employers in Gent, Belgium, Hungarian and Belgian police said on Sunday. Gábor Bucsek, the director of Hungarian police investigations, said most of the women had been recruited from Baranya County, in south-west Hungary. Although they had been aware they would be working as prostitutes, they had been unprepared for threats and beatings unless they handed over all their takings to their employers. Eight suspects have been detained in Belgium and two in Hungary. 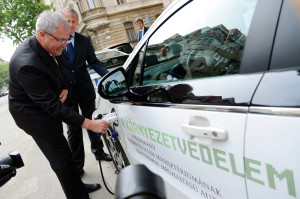 The government will promote the uptake of electric cars with tax benefits and other preferences, Economy Minister Mihály Varga said this week. A related package named after Ányos Jedlik will also be financed from EU funds, he said. Jedlik (1800-1895), a Hungarian physicist, inventor and engineer, was the first to develop an electric car, for which he took out a patent in 1828. Plans are to allow environmentally friendly cars to run on bus lanes and park free of charge. The government will award a coupon suitable for purchasing environmentally friendly products to drivers who replace cars that are over 15 years old with electric vehicles, Varga said, noting this is a common practice in Western Europe. In case of public procurement, the government would favour the purchase of electric cars, for instance by the police or postal service. The spread of electric taxis in Budapest would also be encouraged.

Hungary’s National Tax and Customs Office (NAV) levied fines of HUF 400 million in about 200 cases involving the illegal operation of slot machines last year, business daily Napi Gazdaság said this week. NAV uncovered the cases in the course of making 16,000 checks. Businesses that operate slot machines illegally may be fined up to HUF 100 million. Parliament amended legislation in 2012 that bans slot machines in all places with the exception of those located at casinos operating as a concession. 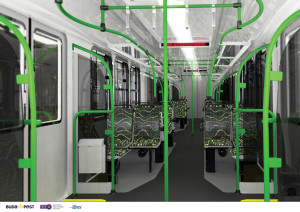 Suburban trains to get upgrade

Budapest Transportation Centre (BKK) has developed a programme to refurbish the carriages of the city’s suburban railway (HÉV). As a first step, a three-car train will be fully renovated before the end of the year and the continuation of the programme will be determined based on customer feedback from travellers on the H5 line.

The Russian government has earmarked a 10 billion euro loan to finance Hungary’s Paks nuclear power plant upgrade, Russian news agency Interfax has said. The document on the government decision, published on the official legal information portal, was signed on Monday by Russian Prime Minister Dmitry Medvedev. The decree authorises the Russian finance, economy and foreign ministries, Rosatom and Vnesheconombank to start talks with the Hungarian government on preparing the loan contract. Russia is extending Hungary the loan to build two new blocks at the Paks plant. The loan will cover 80% of the cost. Hungary can draw on it from 2014 to 2025. Russia’s Rosatom is the general contractor for the blocks.

Sixty-one per cent of Hungarians believe the European Union is heading in a bad direction, a recent Ipsos survey shows. The average in the ten nations involved in the online survey was seven percentage points higher. The survey, conducted with a sample of 8,000, also revealed that Hungarians, alongside Germans and Poles, were the least pessimistic about the EU’s future. Just 17% of Hungarian respondents said the country should quit the EU compared with the ten-nation figure of 19%. Fully 73% of Hungarians criticised the EU for its impact on the economy, 56% for its effect on agriculture and 53% for its influence on the legal system. Just over half of Hungarians gave the EU bad marks for pressuring member states to reduce their central spending. This compares with 62% of the whole sample. Again, just over half of the Hungarian sample agreed with the proposition that the EU gives unfair advantages to rich member states. More Spaniards and Italians were of this view (over 70%) whereas fewer Germans, Dutch and Swedes believed this to be the case (below 45%). 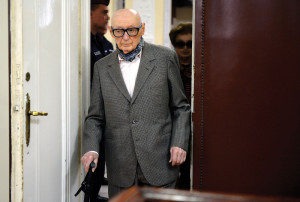 Ex-communist on trial for 1956 deaths

The trial has begun of a 92-year-old former communist leading official charged with war crimes during the crushing of the 1956 anti-Soviet uprising. Béla Biszku has said he does not understand why he has been charged with the murder of nearly fifty people, tabloid Blikk said this week, when he was due to appear in court. He told the paper the trial is unfair and its timing indicates that it only serves to divert attention from people’s problems. The trial is possible thanks to a law passed by the ruling Fidesz party that states war crimes and crimes against humanity cannot lapse. The indictment said that in the immediate aftermath of the thwarted 1956 revolution Biszku was a member of the Provisional Executive Committee, a central steering body of the then newly formed Hungarian Socialist Workers’ Party (MSZMP). The committee had set up a special police force which was found to have been responsible for firing shots at the public, including unarmed protesters. Biszku’s role has been qualified as a war crime for which he could face life imprisonment.