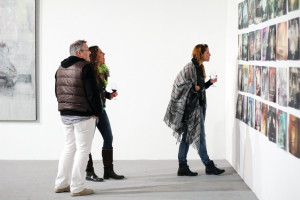 Scaling the metallic stairway up into Budapest Art Factory, the view from the top looks out onto the industrial complex in District XIII. On first appearances, the warehouse-turned-studio blends into the background with its brick façade and flaking plaster, however inside, the loft conversion reveals an open space with clean white walls hung with bright canvases and a sense of community.

Founded by Dianne Brown, Budapest Art Factory came to life in 2006 as a non-profit studio and project space run by artists for artists. Since then, the 800-square-metre facility has not only fostered the talent of its in-house artists (Márta Kucsora, Levente Herman, Dóra Juhász, Sándor Szász and Eszter Csurka), but opens up in the spring, summer and early autumn months for events, exhibitions and studio visits, while mainly functioning as a creative space for its artists.
Since last year Budapest Art Factory has welcomed international talent, inviting them in as part of its artist residency program. The Budapest Art Residency invites respected and internationally acclaimed mid-career artists for a month to organise programs such as exhibitions, workshops and lectures. Currently the art factory is hosting its very first artist in residence for 2014, Swiss painter, photographer and sculptor Andy Denzler.
Denzler’s work has a distinct accent, capturing the analogue world on canvas with echoes of paused VCR tapes and static-laced images. Having only been in Budapest for a few days, he’s already hard at work in his own designated corner of the converted factory space. Warming up for his new Budapest project, Denzler works on a painting based on a photograph he composed and captured in an abandoned villa near Lake Maggiore in Italy. 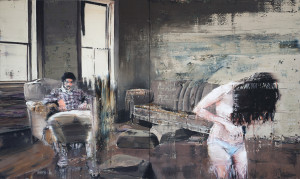 “I want to focus on a concept,” he tells The Budapest Times, “It can be any theme, be it social or political. For this particular exhibition I want my art to tie in with Budapest. When I work in a specific place I think about the people there and what they think about. For me the local influences go into my work at the time.”
Denzler is an established figure in the contemporary art world, whose works have been exhibited in both Europe and America. His style is frequently cited as being at a transition between abstraction and reality, using oils in a creative mix of textures, and using rough lines and thick brush strokes in contrast with rendered background images to make the central figures pop out in three dimensions.
Even though he has already earned a reputation for his work, his residency in Budapest is his first such experience. “It’s interesting,” he comments. “It reminds me of my university days during my masters at the Chelsea College of Art and Design in London.” 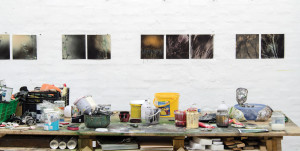 Used to working alone, working together in a team environment offers new challenges and benefits for Denzler.
“It’s definitely a good exercise to learn to focus with so many people around. The space itself is also different. There is a lot of light, so that is also something to consider in my work, since the brightness might make me paint my images darker. However, I usually paint too light, so maybe it could be a good thing to go darker.”
His work can be seen at a solo exhibition marking the end of his residency on 31 May 6-9pm, but in addition the art factory will launch his residency program and its new Thai Salad project with an opening party next Friday 16 May 6-9pm.
Thai Salad, by “art employer” Lucie Fontaine, will span May and June, inspired by the flavour profiles found in Thai cuisine – hot, sweet, sour and salty. There will be a series of presentations within the series, whose participants include Ory Dessau, Daria Pervain, Dávid Fehér and Lisa Rosendahl. The opening on the 16th will present the new projects, served up with a splash of good Hungarian wine.