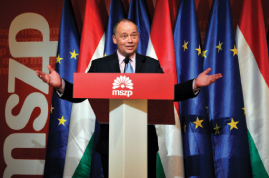 This is the question on the mind of probably all Socialist Party leaders after the party suffered a massive defeat in the European election on Sunday. The defeat was so severe that in MSZP’s former stronghold – the capital – it finished behind the party of ex-Socialist and former PM Ferenc Gyurcsány. This prompted chief Mesterházy and the entire Presidium of MSZP to submit their resignation, which will most likely be accepted at the delegate meeting this weekend. Jobbik, Gyurcsány and Bajnai all see this as an opportunity to bury the former Commies once and for all and become the main opposition force in Hungary. The Socialists are practically the only ones not seeing this as a chance, but they should. If by some miracle they are able to pull themselves together – get rid of the old faces and find a leader who’s not a bore – they will still be the only viable alternative. Without Bajnai E-PM is nothing and he lacks the necessary charisma. Vona and Gyurcsány have charisma, but it seems that Jobbik may have reached its limit and while Gyurcsány clearly has a strong fan base, he is hated by practically everyone else. Nevertheless MSZP needs to hurry up and actually implement the changes they’ve been talking about for the past four years otherwise somebody will emerge and become the new leader of the left.