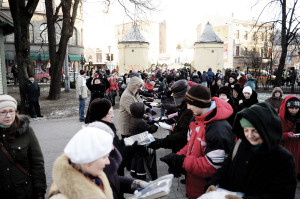 Chain of booklovers in Riga, which is the European Capital of Culture this year

Ambassador to Hungary Imants Liegis is busier than normal as his country readies for the EU Presidency, adopts the euro and goes all cultural

Latvia will hold the Presidency of the Council of the European Union in the first half of 2015. Are you busy in Budapest helping prepare for this?

Every Latvian diplomatic representation is involved with preparing for Latvia’s first Presidency of the Council of the European Union beginning 1 January 2015. The preparations at the embassy include following EU priority issues such as institutional changes this year and developments surrounding the EU Eastern Partnership including Russia’s occupation of part of Ukraine. We will also be welcoming to the embassy two new temporary staff members for one year as from 1 July.

Latvia replaced its lats currency and became the 18th EU Member State to adopt the euro on 1 January this year. Isn’t the euro said to be a sinking ship? Have there been any problems in Latvia and do you have any euro advice for Hungary?

While some eurozone economies have faced challenges during the last few years, the euro currency is alive and kicking. Our neighbour Lithuania plans to join on the same date that we start our Presidency – 1 January 2015. High-level Polish politicians such as Foreign Minister Sikorski argue in favour of Poland joining. Hungary’s neighbours Slovenia and Slovakia are successful members. Latvia wants to be on the inside of Europe’s core decision-making group and sees membership as a further step in integration, which provides an additional sense of security. Hungary’s decision is entirely theirs for the taking.

Riga, the Latvian capital, and Umea in Sweden are the two European Capitals of Culture 2014. Is there any Hungarian participation or events of particular interest for Hungarians?

There is a plethora of exciting events all year as part of “Riga2014” (see link http://riga2014.org/eng/). Given the strength of Latvia’s singing traditions, Riga is proud to be hosting the World Choir Games from 9-19 July with some 500 choirs and 18,000 singers attending. This will include four Hungarian choirs: Ars Nova Vocal Ensemble, Kórus Spontánusz, Lautitia Gyermekkar and Lautitia Ifjúsági Vegyeskar, as well as a jury member, Levente Gyöngyösi.

Hungarian Prime Minister Viktor Orbán has spoken in favour of autonomy for Hungarians in west Ukraine while the US and EU are opposing Russian interference in Ukraine. The Baltic States may be concerned about the growth of Russian influence in the region. Orbán has signed the Paks nuclear plant expansion contract with Russia. How do you see the situation?

The EU as a whole, which includes Hungary and Latvia, has condemned Russia’s illegal occupation of part of Ukraine – Crimea. This breach of Russia’s international and legal obligations has fundamentally changed the security situation in Europe and has global strategic security implications felt beyond Europe’s borders. Russia has embarked on an unprecedented information war using propaganda, including false allegations about the need to “protect” Russian nationals. Hungary’s views about autonomy in neighbouring countries are not shared by Latvia and are not the common view of the EU. Latvia follows closely the bilateral relations between Hungary and Russia, as well as between our other European partners and Russia, but we agree with the importance of seeking diplomatic solutions with Russia.

So are political relations between Latvia and Hungary on a sound footing?

The political relations between Hungary and Latvia as two NATO and EU countries are strong and sound. We are particularly grateful for Hungary’s decision to participate in the air policing of NATO airspace over Latvia and the other Baltic countries as from next year. In addition we were pleased last year to receive Hungary’s support for our candidacy of the OECD

How are you promoting Latvia politically, economically and culturally? What are your embassy’s efforts to strengthen Latvia’s image in this country?

The core tasks of the Latvian Embassy in Budapest are to promote bilateral relations and the image of Latvia within Hungary. We have direct flights between Riga and Budapest run by the Latvian national airline, airBaltic – especially important for Hungarians wanting to visit Riga while it is a European Capital of Culture. We have hosted at the embassy annual events to promote tourism to our region, teaming up this year with the Lithuanian and Estonian embassies to focus on the attractions of the whole Baltic region. Given the very rich cultural life in Budapest, I particular enjoy familiarising Hungarians with the talents of Latvian contemporary composers and musicians, thereby promoting Latvia’s culture. The Budapest Music Centre is proving to be an excellent partner in this respect. Luckily the embassy has a small but hard-working and talented staff who endeavour to promote Latvia’s positive image in Hungary.

What is the trade situation between Hungary and Latvia?

The turnover in bilateral trade has growth potential and is around EUR 130 million annually, with our main exports from Latvia consisting of timber products and mechanical items. The balance of trade is in Hungary’s favour. Latvia is among the lead countries in the EU in GDP growth – around 5% last year and on track to be above 4% this year. Similar to Hungary, this growth is export-led.

How many Hungarian businesses or individuals are in Latvia and what important things are they doing?

The most well-known Hungarian investor is Sándor Demján, who invested in Latvia last year. We have an open and investor-friendly business environment. I know that Hungarian wines are seeking a niche in the Latvian market, which of course is not so big as we have a population of some two million.

How many Latvian businesses or individuals are in Hungary and what important things are they doing?

The most visible business is “Stenders”, which produces and sells high-quality soap and related products. They have several shops in Budapest shopping malls working on a franchise basis. It is also nice to see Latvia’s famous “sprats” on the shelves in Hungarian supermarkets

What about trade agreements, trade fairs, delegations or other visits?

There have been regular exchange visits between Foreign Ministry colleagues during the last two years and a Latvian parliamentary delegation visited Budapest last year. Perhaps the other most active contacts are between the Ministries of Agriculture as I welcomed Latvia’s minister the first week after my arrival in Budapest in September 2012. Defence Minister Hende had a successful visit to Latvia just over one year ago. There are increasing contacts between the Visegrád and Baltic countries on the regional level, especially during the current Hungarian presidency of the Visegrád Four. 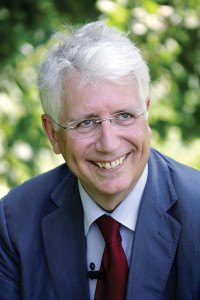 What do Hungarians really know about Latvia? What are some important facts?

I hope they know something about our culture and the fact that some well-known intellectuals and artists came from Latvia such as philosopher Isaiah Berlin, Mark Rothko and Mikhail Baryshnikov. Currently Latvian conductors are in charge of three of the world’s top orchestras – Mariss Jansons at Amsterdam’s Concertgebouw and the Bavarian Radio Symphony Orchestra and Andris Nelsons at the Boston Symphony Orchestra. The question probably needs to be asked of Hungarians. Hungarians usually know about the Baltic Chain of 1989, a peaceful protest when some million Estonians, Latvians and Lithuanians held hands between our three capitals to mark the 50th anniversary of the Stalin-Hitler Pact, which consigned our countries to the Soviet Union. This was part of our “Singing Revolution”, through which we regained our freedom by entirely peaceful means.

What is keeping you busiest in your job at the moment? What keeps you awake at night?

I am busy reporting to my capital about the political situation in Hungary following the parliamentary elections in April and preparing for Latvia’s Presidency of the EU Council. In addition I am accredited as Latvia’s (non-resident) Ambassador to Slovenia and Montenegro, with Croatia shortly (13 June) to be added to the list. Apart from giving me a broader perspective of the region, these additional responsibilities inevitably involve an increased work load and more travel. I was recently kept awake wondering how to finance the visit of a top Latvian string orchestra, Sinfionetta Riga, to Budapest next January, but hope to find a good solution.

When did you arrive in Hungary and what previous postings have you had?

I arrived in September 2012, after spending some three years back in Riga, initially as Minister of Defence then as a Member of Parliament. Being appointed Ambassador to Hungary marked my return to the Diplomatic Service because I began my career as a Latvian diplomat in January 1992, shortly after Latvia regained independence. I was privileged to serve as ambassador at NATO for several years, including at the time of our joining in 2004. I have been ambassador to the three Benelux countries as well as Spain. Before embarking on my diplomatic career I worked as a solicitor in England for some ten years. I am a Latvian born in the UK to Latvian refugee parents, so am privileged to have benefitted from a schooling and higher education in England.

How does Hungary rate on the scale of difficulty (or as an enjoyable posting) for Latvia’s ambassadors?

The responsibilities of representing your country abroad are always serious and challenging, but Hungary’s unique language, rich history and culture make the posting particularly interesting. I am thoroughly enjoying the hospitality of Hungary and its people, plus the mild climate, excellent wines, superb choice of swimming and spa facilities, and thriving cultural scene.

There is a “club” of Hungarian-speaking ambassadors, correct? Are you a member?

Unfortunately I am not a Hungarian-speaking ambassador but have great admiration for those of my colleagues who qualify for membership. However, I am pleased to be part of the “Francophonie” group, which at least helps me to practise my French