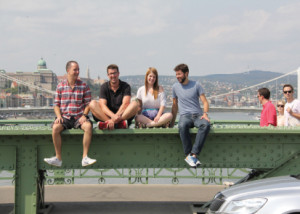 The team
behind Piqniq

Everyone, at least once in their life while travelling, eating in a trendy restaurant or perhaps trying grandmother’s recipe at home, finds themselves in a sharing food moment. On social media it’s a challenge to go a day without some kind of food getting involved. But do we really want to see it there?

There are social networks to share what are we doing, what are we seeing, what are we thinking, but are they the right place to share our food? Supposing there was a community where people could exclusively share their food moments, like a huge picnic time?
And what if those moments could become more than just virtual shares? Excited about this possibility, a Hungarian team created a mobile app. The name is Piqniq and if you take a look (getpiqniq.com) you will see they strongly believe that “Food brings people together. When you share it.”
So The Budapest Times went to meet them.
“The idea came from Tamás [CEO and co-founder] who was working abroad, an ex-IT consultant,” starts János Török, one of the co-founders and responsible for building a Piqniq community. “He was living in an apartment and there were all these smells of food on the stairway.”
Far away from his home and family for months at a time, Tamás was missing some home-made food. “He was not a big cook, so he thought how it could be so cool to use technology to peek into someone’s kitchen and see what they were preparing, and from there reserve and buy a portion of that home-made dish,” explains Török.
Around a year ago, Tamás developed his idea and came up with a prototype. He had already found Török and Misi Szilagyi, co-founder and brand/product expert. To take care of the design, they picked Aliz Buzas.
Last May, the team applied for an incubation programme from Kitchen Budapest (Hungarian Telekom’s Innovation and Incubation Lab), a company that helps new companies which are in a phase of development, providing research for markets and financing. They received a EUR 25,000 investment for the project and to release the app.
Piqniq is a virtual app with a physical mission. They want to create a more open society by connecting people around the world through food, “helping them become happier and friendlier”.
The app works with three different spectrums, Showing, Spotting and Sharing, either of which you can choose, all designed to reflect the way that people share food. The three options stand for different occasions. Showing is used when people share something home-made. Spotting is used at a restaurant, to show it to friends and thus invite them to see the experience. The idea is to share good times and recommendations.
Finally, sharing enables people to invite others to actually reserve a portion of their food. Piqniq has tools to organise an event or prepare a meal, with information about when it will be ready, and you can reserve a portion (it might be free and it might not, depending on generosity).
The platform is being tested on different targets. At the moment users can “highfive”, meaning they “want it”, or they can comment on their friend’s food post. “People use Showing and Spotting options much more, so we realise which way we need to go from here,” the creators say. “We want to collect people and create a community.”
Currently 7% of all the food in Sharing is actually shared physically, at people’s homes or workplaces.
One aim of the app is to offer to people the chance to sell their home-made food.
The team is working to make it simpler by reducing the three options to just Sharing. “From here, slowly people can give each other some feedback and will realise that they can make money from it.” The creators plan to bring back the event supporter tool but this will depend on people’s interaction with the platform.
They are also working to add some new options. One would allow users to share the different stages the food goes through, from preparation to the final result, promoting more interaction among the community.
The most common question people ask on Piqniq is,“What should I eat today?”, and they can find a lot of recommendations. The options are international. “Yesterday, my wife cooked something Indian,” for instance.
But Piqniq isn’t really supposed to be a recipe data base or some kind of rating app, Török cautions. It is all about good experiences, being surprised by the kind of meals that can show up, and having the motivation to feature tasty and nutritious food that you are actually proud to pass around.
To connect people around the world through food, the team has assembled a series of interviews. “Food Stories” collects “heroes” such as a food engineer, a mom who loves to cook for her family, a professional chef or a girl who always has lunch at her desk.
There are Piqniq best users as well, who can be recognised by their excellence.
Three weeks ago the team launched their first #PiqniqChallenge. They asked users to make anything out of asparagus then post it using the #Asparagus hashtag. In their blog, they shared the Top10 and the winner was privileged to decide which would be the next ingredient. The second challenge will be with strawberries.
The team will seek some financial support for this competition through some (non-aggressive) marketing, to create a sustainable business plan. One idea is to give a kitchen-related prize to the winner, such as an oven, and use the sponsor’s brand logo on the platform.
Piqniq has 2,000 user-members from Hungary, the US, UK, Australia, Germany and some other countries. At present the app is only available on iPhone but an Android version is planned within three months. Liliana Borges