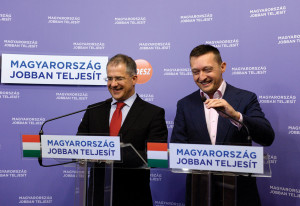 Rogán supports scrapping party-list voting and instead Budapest City Council would be constituted of the directly elected mayor and the heads of the city’s 23 districts, plus nine seats awarded as compensation to parties nominating losing candidates.
The general election in April, when Prime Minister Viktor Orbán won another two-thirds majority, revealed Fidesz to be weaker in Budapest than elsewhere. Eight of the 10 constituencies won by the leftist opposition coalition were in the capital. The overall result and another disastrous showing in the European Parliament election last month claimed the head of Socialist Party leader Attila Mesterházy, and in October Fidesz has a chance of capturing district mayoral posts against the divided left.
Tamas Boros, director of Policy Solutions research institute, said: “Budapest is the only place where the opposition would have a real chance of winning and creating an alternative power base. This is a radical step by the government to weaken the next mayor of Budapest and the city council in favour of district mayors.”
Boros said the rule change might force opposition parties into an alliance again. It could also result in the bigger districts, which are more supportive of the opposition, having the same weight in the city council as smaller ones.
Rogán said: “The new system will be cheaper, simpler, more democratic and more efficient.”
The Democratic Coalition and Együtt-PM, which joined the Socialists in challenging Fidesz in April, both said the proposal amounted to an attempt at electoral fraud. Szabolcs Kerék-Bárczy of Democratic Coalition said if it becomes law they would go to the Constitutional Court.
Kerék-Bárczy said Fidesz “is trying to tilt this playing field toward itself as well”, in reference to Fidesz’s election law changes before the April vote. The proposal “ignores and humiliates the citizens of Budapest”, he added.