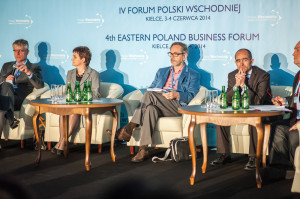 We five journalists have gathered one by one this morning on arrival at Warsaw’s Fryderyk Chopin Airport – a Chinese lady, a Romanian lady and three men: a Latvian, an Egyptian and an Englishman. There waiting for us are five Poles: a man from the Polish Information and Foreign Investment Agency, two ladies from a public relations agency and two women  interpreters. At least once a month similar groups of journalists are assembled from various countries to visit Poland so they can tell the world that this is a crisis-resilient nation very much open for business. In a tight global economic situation, there aren’t enough dollars, euros, pounds or zlotys to go round, so Poland is making sure it attracts its share.
For the Englishman, from The Budapest Times, this trip was heralded unexpectedly one morning by an email from the PR agency: on behalf of the Polish Information and Foreign Investment Agency, it would be a pleasure to invite him on a study tour for journalists organised in the scope of the Eastern Poland Economic Promotion Programme. The tour would last four days and all costs would be covered. Feeling that it would be rude to decline such a polite and generous invitation, we replied: yes, please.
And so, at Warsaw Airport, it turns out there are five of “us” and five of “them”, six including a bus driver. Finally assembled, we board a minibus and thus begins our Polish adventure. We will not be seeing the capital city. This is going to be all about Eastern Poland and first we will be driven south for a couple of hours to Residence Manor House in Chlewiska village for lunch. Here we appreciate for the first time the splendid Polish hospitality that will go hand in hand with the business side of this study tour.
Which will be: day one, meeting representatives of Kielce Technology Park; day two, attendance at the all-day 4th Eastern Poland Business Forum in the Hotel Bińkowski, Kielce; and, day three, meeting people from the Special Economic Zone “Starachowice”and Lublin Science and Technology Park.
Poland, which like Hungary joined the European Union in 2004, at that time had a gross domestic product 38% of the EU average. Now it is 67% and, at EUR 649 billion, the EU’s sixth largest. The country, sixth biggest of the EU 28 with its 38.5 million citizens, accounts for 24% of Central and Eastern Europe’s population but nearly 40% of its GDP.
The message we are given, then, is that Poland has economic and political stability, having transformed from a centrally planned economy into a vibrant capitalist bastion. It is a relative winner of the global financial crisis; Poland alone in the EU maintained a steady GDP growth during the upheaval of 2007-2009, offering a stable and growing economy, and valuable “human capital”, meaning competent, intelligent workers. In the 2014 EY (Ernst & Young) survey of the “Most attractive countries to establish operations in Europe”, international managers placed Poland first in Central and Eastern Europe with 31%. Czech Republic came second on 11% and Hungary limped in at fourth with 8%.
A wide range of Foreign Direct Investment (FDI) has been attracted to Poland in electronics, reasearch and development, domestic appliances, machine and IT sectors, and business process outsourcing. This latter is known in the trade as BPO and involves hiring another company to handle business activities for you.
Poland is going places; it is not sitting on its hands waiting and it is narrowing the gap between it and Europe’s economic leaders. One of the main instruments used to attract foreign investors are Poland’s 14 Special Economic Zones (SEZ), set up to promote local growth. They have been operating for almost 18 years and have resulted in investments of a total value over EUR 20 billion with over 186,000 new jobs. The SEZs are dedicated areas in good locations where investors receive special benefits. A business will have assured tax exemptions, government and EU grants, and employment incentives, and they can begin trading on a specially prepared site, fully equipped with the necessary utilities. 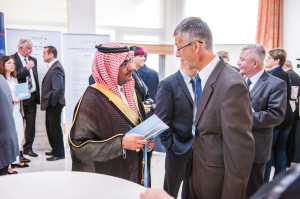 Priority sectors for government grants are the automotive, electronic, aviation, biotechnology and modern services sectors, and research and development.
This is where Eastern Poland and its five SEZs enter the picture. The nation’s successful economic story is not quite so impressive in Eastern Poland, which is more agricultural, and hence our study tour to promote this region. Poland and Eastern Poland, as we hear at the business forum, are a bit like richer North Italy and poorer South Italy or the industrial northern US versus the less developed southern US.
Poland has 16 provinces, or voivodships, five of which constitute Eastern Poland and cover almost a third of the country. We five journalists are visiting two: Swietokrzyskie and Lubelskie. Interestingly, while Hungary likes to consider itself a “crossroads of Europe” (and other vague claims), Lubelskie has six border crossing points into Belarus and Ukraine, and six transcontinental road and railway routes from Brussels, Berlin and Warsaw to Lviv, Odessa, Kiev, Minsk and Moscow.
More facts: almost a third of Eastern Poland’s population is under 25 and they’re getting educated, with 335,000 students in 53 universities. Unfortunately for them but of consideration for investors is that they will earn salaries 15-20% lower than elsewhere in the country. We hesitate to use the demeaning phrase “cheap labour”.
Eastern Poland is determined to catch up and has some snappy slogans: “Macroregion, macrofuture”, “We want to hold your hand” and “What will you say when your child asks: why didn’t you invest in Eastern Poland?” The strong message from the business forum is that they really do want to increase their FDI. Speakers persistently drive home the message that here is an excellent climate for investors to set up business.
From lunch we proceed to Kielce, the Swietokrzyskie capital and home of Kielce Technology Park, an important stop on our tour. The first tenants arrived here in March 2011 and now there are more than 100 Polish and international companies employing more than 1000 people. More than 10% are foreign investors, and while we are there so too are two men from Hyundai of South Korea, who apparently have narrowed down their search for a new site to Poland or the Czech Republic. 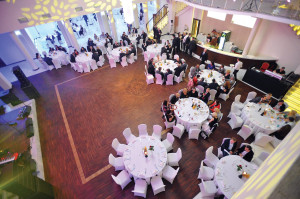 After the business
forum… the fun

Good luck, Kielce, which probably has a better than even chance of snaring them at the Technology Park with its offer of the benefits listed above, and ready-and-waiting production halls at a competitive price, start-ups in two or three weeks if your business plan is ready, expert assistance through incubation and eligibility for EU funding. A special rent system operates for foreign investors but you can also buy land.
At Lublin Science and Technology Park we learn that their goal is to strengthen the scientific and R&D potential of the region, and connect business and science by finding solutions to problems that investors may encounter. Laboratory tests measure, for example, food ingredients, pesticides, nicotine and heavy metals in water, food and soil. The park is open to collaboration with foreign partners, including anyone from Hungary of course.
Shortly after returning to Hungary, your Budapest Times representative happens to meet an English expat who reveals that he makes parts for electric motors. He gets very excited when told that we just visited ABM Greiffenberger, a German company that makes electric motors, and was seduced by Poland’s incentives to open a factory in Lublin. Can we give him contact details? Yes, here you are.
Has The Budapest Times recorded its first success for Eastern Poland? Our kind hosts wanted to promote this region, and they did everything they could to make our visit agreeable and instructive. These were nice people; nice Poles. We cannot guarantee them that Budapest readers will include potential investors but we wish them all the best.
The Polish Information and Foreign Investment Agency (PAIiIZ) supports new investors and promotes the country worldwide, offering information about the legal and economic environment and support in finding partners and suppliers: www.paiz.gov.pl/en
Kielce Technology Park:
www.technopark.kielce.pl/eng/home
Lublin Science and Technology Park:
http://lpnt.pl/en/
ABM Greiffenberger: email info@abm-polska.pl
Testa Communications Agency, PR for PAIiIZ: www.testa.com.pl/en