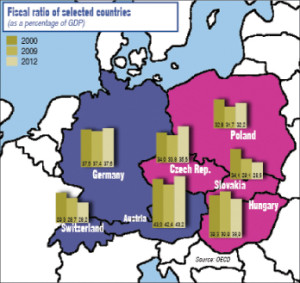 Hungary should be a popular destination for investors with its qualified workforce, low prices, good location and infrastructure. Still the inflow of fresh capital from abroad is shaky. How do taxes fit into the picture?

The personal income tax will hopefully be reduced to a one-digit number in this governance period, Prime Minister Viktor Orbán announced recently on the openly right-oriented Kossuth Radio. The condition for the flat rate to fall under 10% is for economic growth to stay permanently over 4-6%. This is not impossible, he says.
At the same time Orbán spoke out for keeping the industry-specific extra taxes. “In our view everyone who earns a higher profit should take an accordingly higher share of the shared burdens as well,” he explained.

The interview gave important information for those investors who are considering the continuation of their engagement in Hungary or are to decide about a new location somewhere abroad, and thus are considering the Central and Eastern Europe, whole of Europe or global competition. The fact that the investment rate fell to a deep 16% last year, which is a dramatic number for the Hungarian economy, is primarily due to the lack of legal predictability, about which the reigning two-thirds-majority Fidesz does not seem to care much.
In order to reach his domestic political goals Orbán will take on conflicts with anyone, including the USA, the European Commission and the “evil multinationals”.
The investors should try their best to understand the Hungarian voters, who gave another four years of mandate to the headstrong prime minister. Orbán quickly began to do his duty, by making RTL Klub and the whole media sector bleed as the first victim of his third legislation period, because “it is only fair that the HUF 10 billion special taxes will be collected from a sector that is working with huge profit margins”.
So this is what an investor in Hungary needs to understand: if something smells like “extra profit” in today’s Hungary controlled by Fidesz, there will sooner or later be an extra tax introduced at a random rate. We have to note with regard to “randomness” that Hungarian taxation law usually does not allow free allowances (with the result that even on the minimal wage people only get to keep two-thirds as a net amount), in the same way as it is customary in Germany or Austria, whereas special taxes and surcharges can quickly get out of hand.

Orbán: “This is not about economic constraints, it’s about justice”

The ten billions recently pumped out of the media sector seem to be meagre compared to the special taxes applied after 2010 because of the financial crisis to the trade, energy and telecommunication sectors, not to mention the several hundred billions that the Hungarian state got (back) from the banks.
Orbán’s attitude can be seen in his comment in the radio interview: “This is not about economic constraints, it’s about justice.” He can even understand the protests of those burdened by the tax; no one likes to pay taxes, after all.
This is the same Viktor Orbán who likes to clear all difficulties that could limit their competitiveness from the path of the “good multinationals” signed as strategic partners. After his policy of cutting utility costs influenced the energy costs of companies rather negatively on the free market, today Orbán is a loud promoter of a Europe that needs to enter into competition with the USA in terms of energy prices. No specific plans are known yet, but the investors would value it if the service of stable networks was secured. About the topics of competitiveness and taxes the feelings are similarly ambivalent.

Hungary’s fiscal ratio is above the OECD average

The most efficient tax rate for multinationals is usually under 10 percent, thanks to many tax optimisation and benefit initiatives, but these are not available for small and medium companies. The especially competitive countries show in many cases a low tax and fee rate; the average of the 30 OECD countries for this rate was 34.6% compared to economic output in 2012. Hungary’s fiscal rate is 38.9%, so far above the OECD average that it hardly speaks out for the country’s competitiveness.
With this result Hungary can rather compete with Berlin or Vienna (which reached 37.6% and 43.2%) and not with Prague or Warsaw (35.5% and 32.3%), not even to mention Bratislava: The rate of taxes and fees in Slovakia reached only 28.5% of Gross Domestic Product (GDP) in 2012, allowing our northern neighbours to play in the same league with Switzerland and the United States. (See our graphic on the previous page)
It is particularly interesting that Hungary belongs to those countries that heavily rely on their taxpayers. It is true that the high score of the fiscal ratio (40.3%) was reached in the black year 2008, but the 38.9% recently calculated by the OECD is again two points higher than the income of 2011 – thanks to the more modest choices of the Bajnai government the fiscal rate was reduced to 37.1% after the outbreak of the crisis in Hungary.
Tax income from turnover and profits is another story. In Germany these incomes reached 11.4% of Gross Domestic Product in 2012 and almost one third of the total taxation income. In Hungary on the other hand they fell back from their highest value at 10.4% in the crisis year 2008 to only 6.6%. So in this area Hungary did make a lot of progress, balanced out with the tax duty on products and services, which reached an absolute high score at 17.5% of GDP.
This way the circle is closed: The unified tax on income may be halved in the middle term, but on the other hand the higher tax burdens that are much more relevant for the concurring companies are staying. After all, the government has to cover its costs somehow.