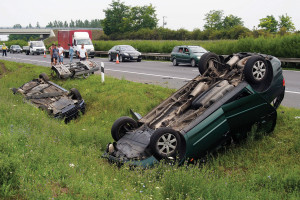 Last weekend I did what hundreds, if not thousands, or indeed hundreds of thousands of Budapest city dwellers do every Sunday in the summer – I drove back from the Balaton.

Driving in Hungary at the best of times can be unnerving. Patience is not a national virtue, at least not for those sitting on a few tonnes of metal, with a steering wheel in their hands and the potential for speed underneath their feet. Üllői út is a favourite inner-city racetrack for boy racers and I have lost count of the number of times I’ve had my daydreams interrupted by the screech of tyres and the clash of gears as cars built for autobahns forget they’re driving the körút.
I’d heard tell of the nightmare that many endure coming back from a weekend’s R&R but I’d never experienced it first-hand. We left Fonyód about 3.30pm to avoid the traffic, hoping that no one else had the same bright idea. And we did fine at first on the motorway until, doing the requisite 110 (or was it 130?) I rounded a curve to be met by the flashing tail-lights of the car in front. Thankfully there were enough chevrons between us to avoid collision but I swear I nearly had a heart attack.
As we crawled forward, I waited expectantly to pass a crash or a police check, or something that would explain the sudden slow-down of traffic. But nothing. Five minutes later, we were back on track and it was full speed ahead.
Then it happened again, and again, and again. And I couldn’t for the life of me figure out what was going on. I thought it might have been merging traffic from the on-ramps, but no. I thought it might have been a speed camera, but that wouldn’t explain going from 110 (or was it 130?) to 40 in two seconds flat.
But what did suddenly make sense was the high number of accidents on that road each summer. This sort of erratic driving can’t be good for the nerves, and after a weekend baking in the sun, who has every brain cell alert and engaged?
I had time, as we inched along, to clock the cars and noticed that many city cars (compacts and economies in rental-car terminology) were competing, or trying to compete, with high-horsepower vehicles that could probably outrace most cop cars, given a clear road and good conditions. This unequal power match leads to more unsafe driving.
I was in an immaculately kept 18-year-old Honda and when I moved to an empty left lane to overtake a Fiat contemporary, I suddenly had an Audi A7 up my ass. He came out of nowhere and was so close to my tail it was personal, intimate even, if not obscene. I was tempted to brake and see where he’d end up… but it wasn’t my car.
Nearer to Budapest, a BMW flew up the on ramp and diagonally crossed four lanes seamlessly. No indicator. No rear-mirror check. Just a bald, arrogant claim to the road that said more about his personality (and yes, it was a he) than anything. And again, the number of fatalities began to make sense.
According to the International Road Traffic Accident Database, Hungarian motorways are eight times more dangerous than UK motorways and twice as dangerous as Belgian and Austrian motorways. In contrast, in Germany, where there are no speed limits, it’s twice as safe to drive as in Belgium or Austria and three times as safe as in Hungary. So if it’s not speed that’s killing people, could it be attitude?

Mary Murphy is a freelance writer and public speaker who was a rally driver in a former life. Read more at www.stolenchild66.wordpress.com