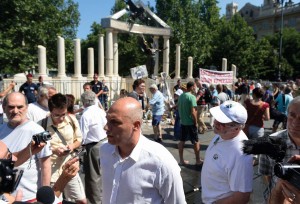 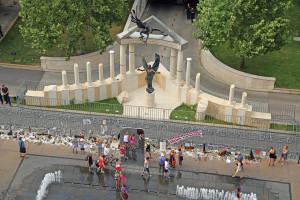 Civilians and politicians protested in Budapest on Sunday after a contested monument dedicated to the victims of Hungary’s German occupation had been erected overnight.

The plan to set up the monument for the 70th anniversary of Hungary’s Nazi German occupation on 19 March 1944 was announced at the end of last year. It has been heavily criticised by opposition parties and civilians ever since, stating that it would distract attention from the nation’s role in the Holocaust.
Demonstrators at the site in District V’s Szabadság tér included Socialists, the E-PM alliance and leaders of the Democratic Coalition (DK). Riot police turned up when some protesters pelted the monument with eggs.
Ex-premier and DK leader Ferenc Gyurcsány said Prime Minister Viktor Orbán was “falsifying the Holocaust” by having a monument “confusing the murderer and the victim” erected “in the shelter of the night”. He accused Orbán of dishonouring all Jewish, Roma and gay victims of the Holocaust.
The opposition E-PM said the monument would be removed if a centre-left mayor is elected in Budapest this autumn. The Liberal Party said that instead of being a reminder of the horrors of war, the monument has become “a memorial of the arrogance of the Hungarian government”.

The Metropolitan Court had rejected in a final ruling a local referendum initiated by the Socialists on the construction of the contested memorial, an MP of the party said the day before the monument was erected. The ruling disallowed any further possibility of legal remedy and thwarted stopping the construction, Pál Steiner, the initiator of the referendum, said.
Steiner, a former mayor of District V, called the justification of the ruling “shocking” in that the court said the referendum could not be held because the government had decreed the memorial was a project of primary importance for the national economy.
Hungary has no economic interest in erecting the memorial, which would not yield any benefit but would hurt the country’s reputation and infuriate democratic states, he said. The opposition Socialists adopted a declaration at their weekend congress in which they called on the government to abandon the construction of a monument that “divides and offends Hungarian people”.
The Socialists also declared solidarity with those civilians who had been “defending justice for the past 101 days” at the construction site and pledged actions of civil disobedience, Steiner said.

The monument was designed to express “the grief and vicissitudes Hungarians felt and suffered over losing their freedom”, Prime Minister Viktor Orbán said. The government fulfilled its duty to Hungary’s “constitutional order, the one-time victims and Hungarians today” when the monument was erected at the weekend, he added.
“The monument will remind all of us that the loss of national independence entailed tragic consequences; it claimed the lives of hundreds of thousands and caused tremendous suffering to millions,” Orbán said, noting that Hungary had been continuously occupied by foreign troops from 19 March 1944 to 1991. “During the long decades of occupation such terrible things happened to Hungary and its citizens that would never have happened if we had stayed independent.”
Orbán warned that a “free, peaceful and happy life, and agreement between the people of Hungary” requires “first of all defending Hungary’s independence and self-determination, or regaining [them] if need be. That should be a lesson, instruction and a commandment for all of us.”

Lázár: there may have been mistakes

There will be no unveiling ceremony, the head of the Prime Minister’s Office said. János Lázár said the government is aware of disputes and “misunderstandings” surrounding the monument, and respects the grief of people opposing the structure, therefore it had decided to drop plans for an inauguration ceremony.
Lázár insisted that the monument was not designed and erected “against some people” but to ensure remembrance. “We have tried to act in a fair, honest and consistent way,” he said. “There may have been mistakes, in coordination, which have cast a shadow on our decisions.”
The government’s motivation was “to make it clear for the present generation and for posterity that the Hungarian Holocaust, the deportation of Jews from Hungary could not have taken place without the country’s German occupation,” he said.

Mazsihisz: efforts were not in vain

The Jewish federation Mazsihisz said its attempts to initiate a dialogue about the monument during the year were not successful, but the efforts were still not useless because several outstanding scientists, church officials and public personalities came forward and criticised its symbols. For more than a hundred days, protests had been continually held against the government’s plan to set up the statue, it added.