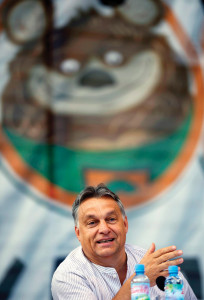 Hungary’s future will be built on a labour-based state of a “non-liberal nature”, Prime Minister Viktor Orbán said at central Romania’s Baile Tusnad (Tusnádfürdő) on Saturday.

Speaking before several thousand people at the 25th Bálványos summer university and student camp, Orbán referred to a “world-wide competition” for the model of a successful state, and said that “the world tries to decode systems that are non-Western, non-liberal and that may not even be democracies, but that are still successful” and feature in the evaluations “as stars”, such as Singapore, China, India, Russia or Turkey.
“We are trying to identify, apart from the accepted dogmas and ideologies of Western Europe, a community development model, a new Hungarian statehood, which will make our community competitive in the global race for the next decades,” he said. Liberal methods and principles of society must be abandoned, and Orbán insisted that Hungary’s earlier, liberal state had failed to preserve community assets, had neglected ethnic communities and could not protect the country or its families from indebtedness.
The welfare state system has exhausted its reserves and is doomed to failure, the prime minister added, insisting that with its amassed debt it is no longer a sustainable model for Western European societies. Orbán said it is an obligation for incumbent leaders to set directions for the next 20-30 years, and warned against a “provincial copying of the West” which would “kill us”.
He dismissed concerns raised over Hungary’s developing ties with Russia, and said it was “our greatest problem” that over two-thirds of Hungary’s exports were directed at EU markets. The ratio should be reduced to 50% and the other half of the country’s export goods sold in “other places of the world”.
Orbán said that what was now happening in the relationship between Russian and the West was very bad for Hungary. It “would be in our interest” for Russia not to lose pace with Western social development.
On another subject, he disagreed with the US diplomatic principle of promoting human rights in the world. “Rather than reciting human rights theses, we should encourage actual, practical and relations-based cooperation.”
Orbán’s “shocking” address at Baile Tusnad was an obituary for the liberal state, the opposition E-PM party alliance said. He was copying the president of Russia, and his speech marked “not just the end of liberal democracy but democracy itself”. The state of Hungary no longer represents all its residents “but a small circle of beneficiaries: those that have been granted land, tobacco stores, public orders or employment”, E-PM said.
According to the Hungarian Socialist Party, Orbán’s speech indicates that he has “left the values of European and Hungarian democracies behind”. Socialist chairman József Tóbiás called for a country in which “freedom is a realistic experience”, whether it is the freedom of civil movements or the individual’s freedom of choosing between jobs.
The radical nationalist Jobbik party referred to ethnic Hungarians in Romania as “the largest minority in Europe deprived of their rights” and criticised Orbán for “omitting to mention that the EU does not provide a resolution” for them.
Board member of the leftist Democratic Coalition (DK) Szabolcs Kerék-Bárczy said the prime minister had in fact called for “a fascist state and dismantling freedom”. Kerék-Bárczy voiced shock at Orban’s citing Russia or China as examples to be followed, “just because those states are efficiently organised”.
According to the green opposition LMP, Orbán and his Fidesz party are responsible for such developments back in the 1990s as the emergence of a liberal democracy that could not ensure sufficient protection against profiteering from public assets.