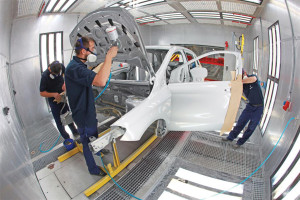 The editors of Figyelő made a snappy remark that although Prime Minister Viktor Orbán announced 2013 as the year of ascension, there are hardly any prosperous Hungarian large companies to be found on the list. The cumulated turnover of the TOP100 companies decreased by 6% compared to the same figure from 2012. MOL is playing within its own league among the top performers; only when adding up the turnover of the five companies that follow MOL in terms of size do we get to the same level.
MOL is a Hungarian regional multinational that has been able to build up strong positions within Central Europe, and besides the rather modest domestic production owns licences ranging from the North Sea to the Middle East. Even if the Croatian government manages to put the Hungarians out of business in the case of INA, MOL’s management will surely earn a good price on the sale of the asset. The Hungarian state purchased a share in the oil company for a lot of money, but nobody seems to be considering MOL a state-company. Most likely because the Hungarian government owns 20% of the MOL shares, but only 10% of the voting rights
MVM, the state-owned energy holding, is quite different because since the state took over the natural gas business branch from E.ON in Hungary, it has managed to place number four among the companies with the most turnover in the country. This company will play a key role in the strategy of the Orbán government through being involved in the basic supply in the future in order to secure the policy of utility cost cutting in the long term.
In addition, MVM is the parent company of the nuclear power plant in Paks, where in the next few years there will be a huge (on a domestic scale) project running. During the project the Russians will be deploying two new nuclear blocks with a capacity of 1,000-1,100 MW, with a modestly estimated cost of around EUR 12 billion.
However, that’s all the “Hungarian” companies which made it on the top list; foreign multinationals take eight of the ten first places: Besides the automotive companies Audi Hungária in Győr, Mercedes Benz in Kecskemét and Magyar Suzuki in Esztergom, the automotive industry is also represented by their supplier, the Bosch Group.
Including Magyar Telekom and E.ON every other spot in the top 10 is occupied by German companies. Hungary’s economy is reviving after the crisis: The cards are reshuffled in the energy sector; the automotive industry will play the role of the jolly joker, for the electronics industry the years of abundance are over.
The Hungarian subsidiary of Philips went bankrupt last year, Nokia, which used to be regarded as the Hungarian export champion from Komárom along with Audi Hungária, will be meeting its end by December. Hungary can only hope that the automotive manufacturers will be more persistent.