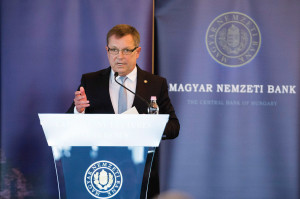 The central bank plans to launch new courses in economics intended as alternatives to the “failed neoliberal studies” taught elsewhere, Matolcsy told vs.hu. Business weekly HVG said the central bank had come up with the equivalent of one and a half times the annual budget of Hungarian public higher education “to promote its own unorthodox teachings”. According to the Central Statistical Office, state spending on higher education came to HUF 123.5 billion last year.
Matolcsy told vs.hu that Hungary’s university education in economics and finance needs an upheaval, and to help this aim new institutions and teachers of a new intellectual leaning are needed. He emphasised that the money earmarked for this purpose would come out of the central bank’s profits and the taxpayer was not liable in any way.
Asked whether the bank planned more real estate purchases similar to Eiffel Palace in Budapest and a provincial wellness hotel, Matolcsy said this would be the case if a positive investment opportunity or a solution to a functional need was found. He told the paper that as a result of the 24-month base rate easing cycle, the central bank was able to save HUF 280 billion in two years.
In addition, it had helped save the business sector hundreds of billions of forints through lower interest rates, and in the longer term, central budget savings of over HUF 300 billion could be achieved thanks to lower government bond yields. As a result of the HUF 280 billion savings, the central bank had been able to finish in the black in 2013 and expected to do the same in the coming years.
The opposition E-PM party alliance said Matolcsy “is running amok and it is in our shared interest to stop him”. Levente Pápa, the party’s economic spokesman, said the way the central bank had created its foundations and the magnitude of its financing was “unprecedented”. The bank has put its own managers on the foundation’s boards of trustees, including Matolcsy himself, Pápa said. The amount spent on the foundations is the right size for a monetary stimulus package, he added.
The Hungarian Socialist Party called for Matolcsy’s removal. He is “throwing money to the wind,” Socialist MP Lajos Korózs, deputy head of Parliament’s welfare committee, said. He added that the HUF 200 billion is 150% of central funding for Hungarian higher education.
The leftist Democratic Coalition (DK) said Matolcsy’s education initiative was “pointless and prohibitively expensive” as well as breaking the bank’s regulations. DK vice-chair Peter Niedermüller said the origins of the HUF 200 billion were “totally obscure” and he did not believe Matolcsy’s explanation.