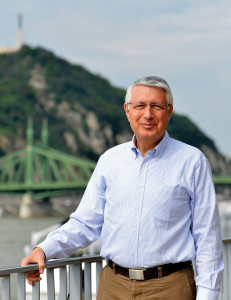 Save for pure hatred towards the incumbent István Tarlós and the other five candidates running for mayor of Budapest, I can’t for the life of me imagine why anybody would vote for Ferenc Falus, who is the joint nominee of E-PM, the Socialist Party and Gyurcsány’s DK. The whole thing started when in an interview Falus compared himself to a horse, then went on to say that he doesn’t believe the horse to be a particularly smart animal. Ladies and gentlemen, your candidate for mayor. Last week he attended a demonstration organised to protest how the government treats NGOs in Hungary. Or at least the journalist of HVG thought so, but when the candidate was asked for a comment it turned out that he had accidentally wandered into the crowd, because there was a good ice-cream place nearby Don’t get me wrong. I don’t hate Falus – nor am I a huge fan of Tarlós – but this doctor clearly doesn’t belong in the political arena. He will lose and he will lose big, so perhaps he should save himself the embarrassment and just quit now. That way at least there is a chance the people who pushed him into this mess – simply because nobody else wanted to do it – would be a bit embarrassed at not having a candidate on the ballot. Not that I believe a real politician is able to feel such a thing.