How come the Swiss cannot see that Hungary is the master of Europe in terms of economic growth? Is this the reason why Hungary made only 60th place in the recent global ranking based
on competitiveness – even three places lower than its ranking last year?

These questions will surely come up because our heads are full of the overall positive economic results measured in Hungary in the past couple of months. However, the published results did not reach deeply; they were only scratching the surface.
One reason is that the most recent report of the World Economic Forum in Davos is based on data collected in earlier years; 2013 is the most recent status considered, and not all segments are measured on a yearly or even monthly basis. Looking back to 2013, the Hungarian economy grew around 1%, which is nowhere near as robust as the growth we have experienced in the first half of 2014. 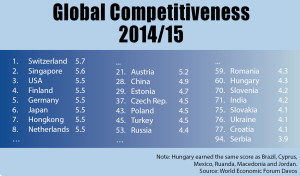 The global report, which has been prepared by the World Economic Forum each year for more than a decade, examines the factors that should create the environment for building a healthy, long-term growth. There are one dozen pillars of competitiveness defined in the report, measured through more than 100 individual indicators.
In the competition of global economic centres the European Union lags far behind Japan and the USA – the United States moreover returned to the winners’ circle, dislodging Germany. Even if Switzerland is still holding up the flag of the old continent in the top list, there are only three more countries from the eurozone in the circle of the ten most competitive economies (Finland, Germany and the Netherlands).
Within Eastern Europe Estonia remains the most competitive economy in the global competition. Among the Visegrád countries (V4) the Czech Republic successfully won back the leading position from the somewhat stagnant Poland; Hungary could only overtake Slovakia, just like before.
Research Institute Kopint-Tárki, the Hungarian partner of the World Economic Forum, did not beat around the bush in making the assessment: The V4 countries ranked at an average place 45 in 2007; however, in 2013 they only managed an average place 57.
This does not really harmonise with Prime Minister Viktor Orbán’s assessment, according to which the V4 nations are supposed to rise up to become the centre of Europe’s competitiveness and emerge as potential winners from the world economic crisis. 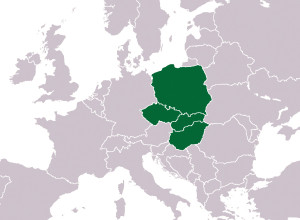 Concerning the researchers, they did recognise that Hungary is not doing badly on a global scale, especially since the country can present good efficiency indicators. On the other hand there are problems with innovation, corruption and institutional conditions.
There was no progress compared to last year in the critical issues such as high tax and fee burdens, state bureaucracy and unstable legal environment. Only the significantly lowered interest rates helped the improvement of Hungarian competitiveness. There could also be tragic consequences for the country in that it has no means to stand out from the competition in its immediate environment; unlike the Czech Republic and Poland.
No one in the region could compete with the Czechs in terms of macroeconomic environment, status of technological development, complexity of business environment and innovations. Besides this the Czech Republic earned top scores for infrastructure, health and education, and efficiency of the goods and labour markets, by which Prague is just a bit above the level of its competitors, if that can be a consolation.
Poland beats everyone, even the Czechs, in the areas of institutional background, financial market and of course the size of its domestic market. In this region the Czechs are leading in six of the above described twelve pillars of competitiveness, the Polish are leading in three other pillars and the remaining three are at the same level in both countries. Fine enough but where is Hungary in this competition?
When you look at Hungary’s total score of 4.3 on the World Economic Forum table and compare it with the result of 4.5 awarded to both the Czech Republic and Poland, you might start thinking that the comeback expected by the prime minister has already been achieved. In bitter reality, however, Hungary must rather be compared to the situation of Slovakia, which is constantly ridiculed and said to be anaemic from the point of view of the World Economic Forum, or even to Romania. Comparing to Poland or even the Czechs would simply be too ignorant.

Hungary: Supply chains are not really deeply integrated in the national economy

The country is doing the worst (3.5) with innovation among the twelve pillars, which is a weak area for all the countries in the region. Hungary is also the last among the V4 and Romania for complexity of the business environment (3.8); the World Economic Forum specifically criticised here that the competitiveness of the country is fought for via the moderation of labour costs and that the supply chain is not really deeply integrated in the national economy.
Surprisingly, the development of the financial market is also one of the weakest in the region (3.9). Concerning technological development Hungary is not doing that badly (4.4), but even Slovakia and Romania improved so dynamically in the last few years that the much-praised Hungarian position, for instance in the broadband mobile communication, is now no more than history.

Recognition of the quality work performed by the Hungarian Research Institute

The World Economic Forum’s critics are not naming the state as the only scapegoat for the problems. Hungarian companies only earned a modest 2.9 for their activities in research and development, which is just above the global median of 2.3. The country is doing very well in terms of availability of scientists and engineers (4.2) measured against a global median of 3.4.
The cooperation of universities and industry in Hungary even earned 4.3 against the 2.3 of the about 150 countries measured. Finally, the quality of research institutes in Hungary reaped a rating of 5.1 compared to the median of 2.3, which is really something to be proud of. However, these are only individual indicators, insufficient to be built upon.