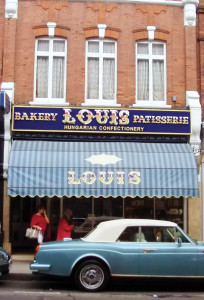 The décor hasn’t changed since the 1960s and that’s probably one of the reasons for having such a great charm. Louis Patisserie is one of those places where it’s easy to travel back to the communist past to a typical scene of an Eastern European film from the 1950s.

I have to say that I found this tea room by coincidence while visiting the beautiful area of Hampstead on a Sunday afternoon. And it was there, in front of the wide collection of delicious Hungarian pastries, when I felt the need to go inside.

The smell of coffee and the smiling blonde female staff welcomed me, and helped by the groups of people speaking broken English, I suddenly found myself in a different scenario: I felt I was somewhere in Vienna or, even better, in the centre of Budapest in one of those legendary cafés of the inter-war period. If there was something clear, it was the fact that this place made me feel far away from London…

Behind this tea room we find a Hungarian expat called Louis Permayer who opened this place in 1963, becoming the city’s only Hungarian patisserie. Therefore it was easy for Permayer to attract the last remnants of NW3’s wartime refugee population from Eastern Europe.

Today Louis Patisserie tea room can be recognised very easily from outside thanks to its blue awning and, of course, the exuberant selection of cakes. With a small seating capacity, the room gets packed with people who don’t mind sitting shoulder to shoulder with strangers, probably because this venue has been more than just a tea room for over 40 years. Louis Patisserie was and still is a meeting point for the biggest Hungarian community in London. 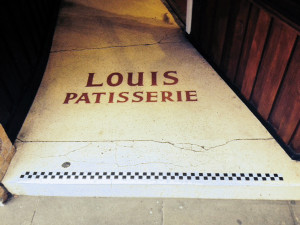 Hampstead, home of the Hungarian community in London

Hampstead has, for a long time, been known as the centre of the largest Hungarian community in the British capital. It is also the place where artists, writers, architects and photographers, the majority Jewish, were exiled during the time of the Nazi occupation.

In October 1956 it was the Hungarian Revolution that brought 12,000 Hungarians to London, most of them settling around the Hampstead area. One of them was writer and journalist Mátyás Sárközi, who declared for Culture 24, a Brighton-based digital cultural publication, that Hungarian Londoners saved the Houses of Parliament: Colonel Miklós Szerelmey (1803-1875), an army engineer, invented a coating material called zopissa board soon after settling in London. This fluid penetrates stone but allows it to “breathe”. With the use of zopissa, Szerelmey’s company saved the deteriorating stonework of the Houses of Parliament.

Sárközi also recalled how Hungarian film-makers settled in London, including the Korda brothers and Emeric Pressburger (1902-1988), making a huge impact on British cinema of the 1930s, 1940s and 1950s, and generally contributing to the British cultural sphere.

In any case, it was probably 1956 that encouraged Permayer to escape and begin a new life in the UK. What he could not have imagined was that one day he would be opening a Hungarian institution in the heart of Hampstead.

Getting there: The nearest tube station is Hampstead, on the Northern Line. There is also a bus from Farringdon (46) that goes within 50 yards of the place.

Where to stay? Escape the centre of the city and find a hotel near Hampstead Heath. The city centre is only 15 minutes by tube.

What else to visit in Hampstead? Don’t forget to explore the idyllic Hampstead Heath, one of the best love green parks in London.

Marta López is a Spanish travel writer based in London. She loves cinema, photography and Europe. Marta is currently working on her first novel based in the City of Light.