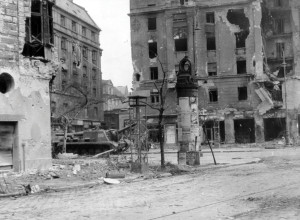 23 October 1956 was the day when the Hungarian Uprising began, against the Hungarian version of Stalinism and the oppression by the Soviet Union. Most parties on today’s political scene are trying to cut themselves a slice of the revolutionary cake. Historian Krisztián Ungváry explains in this interview with The Budapest Times how this day changed the perception of Hungary.

This was the day when the revolution broke out in Hungary. The university students originally wanted to organise a solidarity demonstration for Poland. This was prohibited first and then it was approved. This attitude made it clear that the authorities were uncertain. The demonstration began on the afternoon of 23 October. The demonstrators demanded in front of the Parliament that Imre Nagy would speak to them. They were addressed with the words “Dear Comrades” and they answered that “We are not comrades”. With this sentence it was clear that something new will begin with the revolution. The first fights happened in the evening and the Stalin statue in Budapest was overthrown.

The revolution was beaten back in a bloody way. How did János Kádár’s regime handle this topic after the consolidation of the system?

1956 was an absolute taboo. You were allowed to say only negative things about it. In general people rather kept silent; they avoided speaking about it at all. In the 1980s they were talking about the unfortunate incidents in 1956.  This emphasised keeping the distance from the events. In the GDR the authorities did not make the Wall a taboo; they used it as propaganda to demonstrate the strength of the dictatorship with it. The events of 1956 could have been used the same way in Hungary but János Kádár did not want to provoke the society, so the topic was neglected.

Most people do not think in historical categories and do not care about history. Only a small minority thought about this day actively. 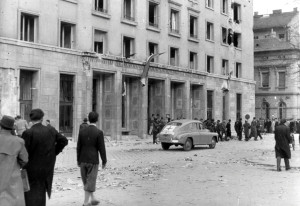 What role did the protest of 1956 play in the proclamation of Republic on 23 October 1989, and the consequent end of the People’s Republic in Hungary?

The day was chosen intentionally. The question is much more what would serve as a guideline for a democratically elected Hungarian government. Should they orientate towards 1956 or rely on something else? It would be difficult to rely on 1956 because the contents of the revolution were not clear. The parties that time were unable to develop.  The current Hungarian state symbol depicts a crown. Between 1989 and 1991 there was heavy discussion whether the crown should be there or not. The crown on the state symbol is more a reference to 1945 and not 1956.

1990 was the year of the first parliamentary elections in Hungary. How did the perception of 1956 change then?

The perception did not change due to the free elections but due to the fact that people were allowed to express themselves freely. So the transformation cannot be seen in black and white. The national uprising in 1956 was also after 1989 a political topic. In the past only those intellectuals with a left past carried the memory, which fought on the side of the rebels during the revolution. In 1989/1990 they were forced into the background. Common people, who played no role in keeping cultural memories, played a more and more dominant role. In the politics they represented the right or the conservative parties. The victim organisations are confronted with the same position.

On 23 October numerous political events are organised. Are the memories of this day misused for political purposes?

Yes, of course. Politics always uses such events from which they can make political capital. This was always the case and it will always work that way. All the parties want to present themselves as the heirs of the protests in 1956. They do it with a different level of success.