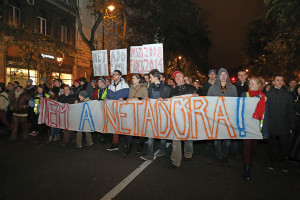 Opponents of the internet tax pledged after their first protest on Sunday to hold demonstrations every 48 hours until the proposal is revoked. While many may have expected a smaller gathering on Tuesday, tens of thousands of people took to the streets of Budapest and numerous other cities in Hungary. News agency Reuters estimated the crowd in the capital at 100,000.

The Budapest demonstration began at District V’s József Nádor tér and moved across the Danube to the Zero Kilometre marker on the Buda side of the river at Clark Ádám tér.
Zsolt Várady, a founder of Hungarian social media website iwiw, told protesters filling the square that by moving to the sign they want to show the government how much tax they are willing to pay for internet use – zero.
“The internet tax is a symbol of the government’s despotism,” he said, adding that “we are many and our goals are clear, so we will be able to prevent the introduction of the tax”. Student activist Károly Füzessy invited Prime Minister Viktor Orbán for a public debate about the tax and added that if Orbán cannot be convinced and a “national consultation” is not started, then protests will continue. Füzessy said they would not let Parliament pass the internet tax law and he called on protesters to gather again on the day of the vote to prevent “the introduction of this unfair and unnecessary tax”.
Parliament is expected to vote on the bill on November 18.
Tuesday’s march followed the first large-scale protest on Sunday, which culminated with a heated outburst that saw the Fidesz headquarters damaged after being pelted with old pieces of computer equipment and phones.
On Monday Fidesz MPs submitted to Parliament a proposed amendment to the planned new tax on internet data transfer. The motion calls for capping the tax to be levied on internet traffic at HUF 700 a month for private persons and HUF 5,000 a month for companies.
Fidesz group leader Antal Rogán said the amendment ensured the internet tax would not be payable by subscribers but by telecom service providers. A strict law would guarantee that providers should not “pass on” the impost and not even a penny worth of new burden would fall on subscribers, the Fidesz press office claimed. If necessary the party would propose amending even further laws to this effect.
The government says it proposes to use the revenue for Hungary’s contribution to the mostly EU-funded programmes aimed at enhancing access to broadband internet.
József Tóbiás, head of the opposition Socialist Party, said the internet tax is not acceptable in any form. It would work against modernisation and would hinder the construction of a knowledge-based society, he said.
The leftist opposition Democratic Coalition said that although the mass protest targeted the government’s internet tax plan, it had turned into a demonstration against the “Orbán regime”.
The Hungarian Facebook page “100,000 against the internet tax” organised the two demonstrations after wide condemnation of the bill and calls for it to be scrapped.
The unexpected proposal came quickly after this month’s municipal elections and was announced by Minister for National Economy Mihály Varga.
The idea is not new, having appeared in 2008 when then-culture minister István Hiller proposed a 0.8% internet tax, but it was not introduced in the end due to strong opposition from the public. Fidesz, in opposition at the time, was also strongly against the idea, saying that “taxing the internet is obviously unnecessary, not thought through and in general a bad idea because it keeps new users away from going online”.
Reaction to Varga’s revived idea immediately fired up the internet community. An internet tax calculator soon appeared online and popular data-sharing website NCore added prices to the files available on their website.
According to them, the tax after watching every episode of the TV series Friends would be HUF 77,958. Those who tried to show the fun side of the story started creating numerous memes on the subject. Then they got more serious.
The two demonstrations have proved to be among the greatest protests against the government of the past few years, with people of all ages turning up. Noticeable were the younger generations who had not protested since the Fidesz education reforms. 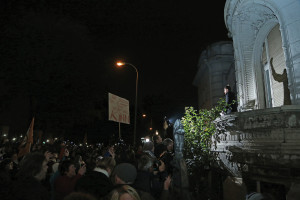 The Facebook group had over 38,000 followers within hours. It pledged demonstrations every 48 hours. The creators of the page started organising a first demonstration, to which around 30,000 people signed up. Protestors on Sunday were mysteriously asked in a video to bring discarded computing devices such as keyboards, routers and monitors.
They carried signs saying “We won’t pay taxes to criminals” and “Orbán get out!”. Some brought flags with portraits of Orbán and Russian President Vladimir Putin. Protest organiser Balázs Gulyás told them: “We will not pay for the corrupt [National Tax and Customs Administration] NAV to buy [Foreign Minister] Szíjjártó a new house with a swimming pool or a new stadium for Orbán. The government does not like the freedom of the internet. We only turned our clocks back, not the century. … Our prime minister is a digital illiterate”
Gulyás revealed that the devices people had brought would be used as construction materials for a dam in front of the Fidesz headquarters to keep the internet tax away from the people.
In Heroes’ Square the crowd, swollen by football supporters from a previous demonstration, were reminded that Orbán had once stood in the same spot and called for the Russians to leave Hungary, but had now he signed a pact with them. “Traitor,” responded the crowd.
Some went to the nearby Fidesz building and pelted it building with the electronic devices they had brought, breaking windows and shutters. One protester climbed up to the balcony and waved the flag of the European Union.
Fidesz condemned the violence, although the unexpectedness of the tax proposal was revealed when some of its party members expressed surprise.