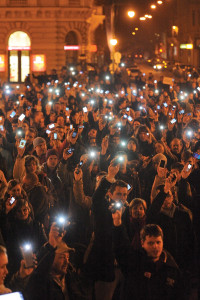 A national consultation will be launched In January on the subject of internet services, including the financial aspects, Prime Minister Viktor Orbán has said after withdrawing the planned internet tax following large street demonstrations.

Opponents of the tax say “consultation” has ready been held in the form of the protests that led to the government withdrawing the bill submitted to Parliament.
Orbán said on his weekly radio appearance that the internet tax planned as an expansion of the telecom tax could not be introduced in its current form, and the bill needs to be amended because the debate over the new tax has “derailed”.
People see an internet tax where the government only wants a technical amendment, an expansion of the telecom tax, he said. As the public now questions the rationale behind the whole thing, “under these circumstances nothing can be introduced. We are not communists, we do not govern against the people but with the people.”
It was “necessary to find out where the huge profit from internet services goes and whether parts of it could be kept in Hungary and channelled into the budget”, Orbán said. The government had proposed a tax on downloads at HUF 150 per gigabyte payable by internet service providers. A modification to the bill would have capped the tax at a monthly HUF 700 for households and HUF 5,000 for businesses. 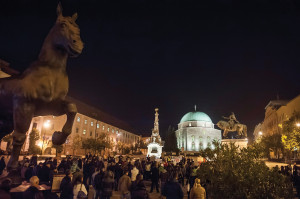 Far-right Jobbik’s deputy leader Előd Novák said his party was partly to thank for the government “backing off”. Novák said the government should instead introduce a free basic internet service to make telecommuting and electronic administration accessible to those who cannot afford Hungary’s internet fees, which are outstandingly high in international comparison.
E-PM called it important that the government accepted taxing the internet would be unwise. The party said the tax on cafeteria and “other austerity measures” should also be withdrawn.
The LMP called on Orbán to fully and definitely withdraw the internet tax. Co-leaders Bernadett Szél and András Schiffer said there is no need for a national consultation because Hungarians have already expressed their views against. Orbán has retreated due to the huge social protests but he has only delayed its introduction and will probably make another attempt, they said.
According to the Socialists, what Orbán really said was that the internet tax would be introduced under a different name, and at a later time, following a hypocritical consultation. Orbán has not backed off, just taken one step back to win time for pushing through his will, Socialist leader József Tóbiás said.
The Democratic Coalition said Orbán has acknowledged a partial defeat. Board member Szabolcs Kerék-Bárczy said the government would nevertheless introduce the tax later.
The demonstrations against the planned tax have been “a  victory”, organisers said. Demonstrators filled József Nádor square last Friday, home of the Ministry for National Economy and the site of earlier larger demonstrations, and welcomed the withdrawal of the bill.
Several speakers addressed the event. “Prime Minister Viktor Orbán for the first time had to admit that his tax is not supported by the majority of the people,” Balázs Gulyás, the organiser of the Facebook group “One hundred thousand against the internet tax”, said. Károly Füzessy, a student activist, said their “task” was far from over and added that there was no need for the public debate on the tax flagged by Orbán because that had been done already.
Demonstrations were also held in Szeged (left) and Pécs (bottom) last Friday.
The outgoing European Commissioner for digital agenda welcomed that “the Hungarian prime minister had withdrawn the internet tax proposed as a first in the world”. Neelie Kroes said she was glad “the voice of the Hungarian people has been heard”.
Kroes had sharply criticised the plan and urged people to join protests. She said internet use should be encouraged and it was not right to bring in measures to the opposite effect. She was proud that the European Commission had played a positive role in protecting European values and a digital Europe. (Flip to page 18 to see how the internet community reacted to the idea of the tax.)