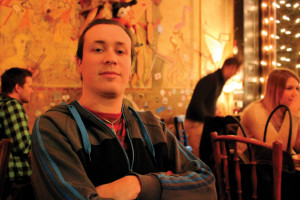 Budapest is always a wonderful experience – no matter if you only visit the queen of the Danube for a weekend or if you spend your whole holiday here. But what about the expats who are living here? How do they experience the city? What is it that makes Budapest so worth living in? In this issue you can read how you can stay up all night partying and still find the perfect goodnight snack.

Pierre Bosznay, who goes by the name Lapidem for his DJ performances, plays music that gets the party going on the dance floor. Often he can be found performing in Mika Tivadar, 400 or Lokál Bár – alone or as part of the DJ-duo Most Wanted.
The young man’s name reveals his origin – the French Pierre collides with the typical Hungarian surname Bosznay. He was born in the French town Alençon in Normandy as the older son of a French woman and a Hungarian businessman. In 1998 the family relocated to Budapest where he went to a French school.
“I only really started studying Hungarian when I was around 18,” explains Bosznay, now almost 24, who cannot decide if he is more Hungarian or French. His mother moved back to France a few years ago and is still living near Alençon running a pony farm. So several times a year he spends some time in France visiting her and his grandparents. But his home, says the cosmopolitan, is Budapest, a city he loves especially for its thriving nightlife.
It was here in the Danube metropolis that the half-Hungarian found his love for the turntables. His roots lie in the Psychtrance scene. “The parties back then were mad. You were taking a bus to nowhere and partying all night – till finally in the morning you realize that you don’t even know how to get home,” he says with a grin. 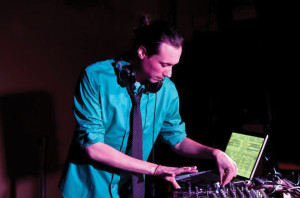 Since then Bosznay has concentrated on other styles of music. Including Balkan beats, Ska, Deep house and Downtempo. The young DJ loves to fuse music of different genres with hot electro-beats. Almost a year ago he discovered electroswing. “When I started playing swing people still were like: ‘Huh? What’s that?’ Today electroswing is one of the hottest trends in town.”
Lapidem’s favourite venue is Lokál Bár. “This place gives me the most freedom. The management and the audience there already know me and I can easily try new things.”
Surprisingly enough, the music enthusiast is not a frequent visitor to clubs himself. When he goes out with friends he prefers a small kocsma (in English: pub). “Not too many tourists, low prices and a mixed crowd of students and old Hungarian alcoholics,” is how he describes his favourite pubs. Late at night he might even set a foot into Instant. “After 4am Instant is the best. Most people have already gone home and the DJ only plays the songs he likes. That can be really interesting.”
The graduate in event management is a little worried about the gastronomic developments in Budapest’s nightlife. “More and more of the new, major clubs are catering to a rather snobby, rich, foreign audience. New bars open up everywhere. They don’t have any concept and they don’t invest too much. Mostly it’s just a table and two chairs. It’s only about getting the tourists’ money.”
Asked if he visits Szimpla, one of the most popular bars among tourists and sometimes criticised as such, Bosznay simply answers: “If I wanna meet French people – of course. I don’t wanna complain about Szimpla being too touristy – that’s good for the city – but it’s not for me any more.” He likes to avoid crowded locations. Also the now hyped Gozsdu udvar is somehow “too much” for him.
He can’t get enough of burgers. If you want them delivered: Attaboy; if you want a somewhat more elegant American dine style: Jack Burger next to the Basilika; if you have late-night cravings: W35 on Wesselényi utca – for every time of day and night he has a recommendation where to get the best burgers. One last dining tip: “If you are looking for the best good-night snack, Pizzica, a place on Nagy Mezö utca that just offered this spring, offers proper Italian pizza. It is just the best pizza in town,” says the professed fast-food gourmet.
Bosznay still isn’t sure whether the culinary delights of the city can hold him forever. “I can imagine leaving Budapest one day and maybe going to live in another city.” Who knows, maybe one day he will have his major breakthrough within the European electroswing community. Then the next step will be becoming one of the Most Wanted in Parisian, London or Berlin clubs.
Lapidem’s frequent performances include the very popular Balkan Party in District VII’s Mika Tivadar. The next one will be November 14, or if you cannot wait that long to see Lapidem at work, check out his performance in 400 on Kazinczy utca this Saturday night.