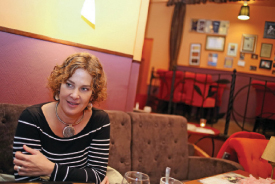 Anna Terfy: Instead of just throwing food away we can make good use of it.

On average one third of all groceries sold will end up as garbage. This ratio is not better in Hungarian households: around 400,000 tons of food land in the rubbish each year. While some people buy too much, others suffer from hunger. The Hungarian Food Bank wants to right this.

The world is severely out of balance in this matter. “We connect wasted groceries with people who are in need of food,” Anna Terfy, a manager of the Hungarian Food Bank explains. “Instead of just throwing it away we can make good use of it.”
The organisation has been redistributing groceries this way since 2005. One of the founders encountered it working throughout Europe in France and thought: we should have something like this in Hungary too. They founded the Food Bank in Budapest together with FEBA, the European federation of food banks. However, they soon learned that the need for food stretches far behind the city limits.
Numerous co-operations were established all around Hungary. The Food Bank seated in District XVII of Budapest could distribute 33,000 tons of groceries worth HUF 13 billion for use in charitable projects. They managed to feed and protect from hunger half a million Hungarians last year. “This year we are trying to help 300,000 people,” Terfy says. “This is less than in 2013 because we have received fewer donations.”
How does the food reach the ones in need all over Hungary? “We do not deliver the food directly to the needy ourselves; we cooperate with 2,200 non-profit organisations,” she says. “They get food packets from us and they deliver them to their clients.”
These people do not have to pay anything for the food donation. The cooperation involves both large organisations such as the Maltese and the Red Cross and small local projects in rural regions. One reason why they chose this distribution method is that the Food Bank does not want to decide who gets food and who doesn’t. This is why they carefully choose the organisations they are willing to work with.
“It’s very important to know exactly what kind of organisation we are talking about,” Terfy explains. “Children need other kinds of food to elderly people.” Via the network of non-profit organisations the Food Bank can help all kinds of social groups; donations go to institutions for children, homeless shelters, organisations supporting large families, disabled and elderly.
For the Food Bank it is also very important to help the people in need in the long term: “We want to give more to the people than just food. Our partners are not only feeding these people but helping them continuously.”
Ten sponsors help the Hungarian organisation. They come from the food industry and they give financial support. Some of the further investors are the Ministry of National Development, two EU funding projects and private supporters. “In the meantime it became easier to find sponsors,” Terfy reports. “They have already heard about us and they know that we are a serious and good organisation. In the beginning it was clearly more difficult.”
Recently an anonymous supporter suddenly wired them the nice amount of HUF 2.5 million. However, such large donations from private people are the exception. Food Bank receives the most donations, as do all the other organisations, around Christmas.
Nevertheless they are trying different ways to make their case known to the public. The “Give food a chance” campaign aims to make people aware of wasting food. The Seed Campaign allows supporters to donate seeds instead of food. Small communities can apply to learn how to grow vegetables from seeds. Experts are sent out and the whole community joins in.
“In the rural regions there are many areas at the moment which are not used due to the fact that people do not know how to plant vegetables,” Terfy says. Of course, what they learn to grow they can also eat.
The Food Bank may not be able to correct the imbalance between having and needing in Hungarian society but it is taking steps in that direction.

If you would like to become a charity worker or a sponsor, apply at elelmiszerbank@elelmiszerbank.hu or by phone at (+36-1) 261-3991