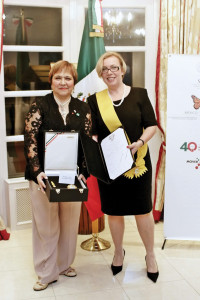 Teréz Dehelánné Dörömbözi represented Hungary in Mexico from 2009-2013 as ambassador extraordinary and plenipotentiary, which in diplomatic terms means you have full authority to represent the government.
The Aztec Eagle was established in 1932 by the Mexican State to acknowledge foreign nationals who perform prominent service to the Mexican nation or humanity. It is the country’s highest state decoration for foreigners and was granted to Dörömbözi by the President of Mexico, Enrique Peña Nieto, for her significant contribution to developing and deepening friendship and cooperation between the two countries. 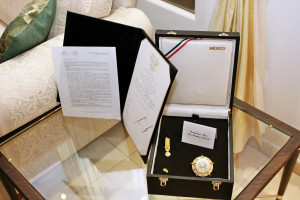 The Official Journal of the Federation in Mexico reports that Dörömbözi made distinguishable efforts to forward bilateral political dialogue and promote economic relations. It was in this spirit that Mexico and Hungary could hold the VII Political Consultations between the ministries of foreign affairs in 2010, the first Joint Economic Committee meeting in 2011, the signature of the Double Taxation Avoidance Agreement and Mexico’s participation in the first Latin-American Forum in Budapest, both in 2012.
Dörömbözi’s activities saw a visible growth in bilateral trade, to USD 1.3 billion in 2013. In the cultural and educational field she brought internationally successful Hungarian pianist Gergely Bogányi to give two concerts in the Palacio de Bellas Artes, Mexico’s most renowned concert hall, and Romani violinist Roby Lakatos to participate in the International Cervantino Festival.
The decoration was bestowed upon her by the Ambassador of Mexico to Hungary, Isabel Bárbara Téllez Rosete, in Budapest on Monday. Mexico and Hungary are marking their 40th anniversary of diplomatic relations in 2014.