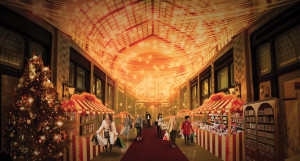 Faced on Christmas Eve with a huge building containing 179 rooms and suites full of guests and not a single chimney in sight, Santa Claus might well throw up his arms in despair and leave his presents in his sack. Fortunately the Four Seasons Hotel Gresham Palace Budapest has an alternative plan that will see its occupants don’t go empty-handed.

This year the five-star hotel in one of Budapest’s most magnificent buildings is holding its very own Christmas market for the first time. A host of other special events has also been organised to make this festive season go with a glow. And shoppers looking for that great gift will find it a whole lot warmer than rival outdoor attractions at the Basilica or Vörösmarty tér. There, on a really cold night, the peril of frostbite can tend to spoil the fun a bit.
The Gresham Palace Christmas Market in the hotel’s spectacular Zrínyi Passage opens its gates to the grand public and hotel guests from 25 November until 30 December, and will be offering a variety of goodies: from Hungarian culinary specialties through local arts and crafts to luxurious items carrying famous brand names.
Continuing the Hungarian tradition, mulled wine will be on hand to warm the cockles of your heart and Christmas melodies will set the seasonal atmosphere as only they can.
The Gresham Palace has organised six other offers for this Christmas-New Year.  The first of these is the “Festive Package” with a choice of “Festive Package on Christmas” or “Festive Package on New Year’s Eve”. Both include a night’s accommodation in a luxurious room with American Breakfast, and the former also offers Christmas Dinner with entertainment on 24 December and Christmas Brunch with entertainment on 25 December, and the latter features a New Year’s Eve Gala Dinner with entertainment on 31 December and New Year’s Day Brunch on 1 January.
The second offering, “Turkey To Go”, means you can call instead of cook, and order something special for your family from the Four Seasons kitchen. This is lunch or dinner for six persons with roast turkey with herb stuffing, roasted sweet and mashed potatoes, green beans, brussels sprouts, carrots, cranberry sauce, gravy and pumpkin pie. An oven heating tray is included and “Turkey To Go” is available from 27 November to 1 January.
Third, “Christmas Eve” package promises to start any festive celebration on the right foot with an á la carte menu for lunch at the Gresham Restaurant or an elegant Festive Dinner at the hotel’s Páva function room. This five-course 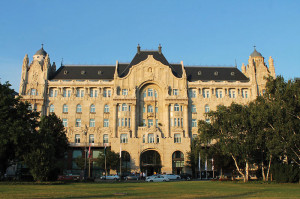 Christmas Eve Dinner offers holiday favourites such as Foie Gras Terrine with Blueberry Macarons, Pumpkin Compote and Pine Jam, Roasted Halibut Filet with Sundried Tomato Crust, Jerusalem Artichoke Puree and Clementine Sauce, and “Bouche de Noel in the forest” for a sweet ending. Servings are on 24 December from 6-10pm. The Gypsy Quartet will set the tone for a merry celebration, and Páva boasts floor-to-ceiling windows that overlook Széchenyi tér, the Danube and the beautiful illuminated Chain Bridge and the Castle District.
Next, “Christmas Day” package opens with a buffet breakfast from 6.30-11am or you can enjoy your Christmas morning in your traditional way then join the Gresham Palace for brunch in the restaurant.
Served to the accompaniment of live music from 11am-3pm, this dining experience features seafood, salad, soup, “Kürtöskalács” chimney cake, egg and cheese stations; a carving station offering specialties such as Lavender and Honey-Roasted Turkey with Giblet Gravy; Roast Prime Rib; Paprika Crusted Fillet of Pike Perch, Tokaji Sauce; and a tempting kids’ station and dessert bar. Separately, a five-course Christmas Dinner is offered in Páva with the Gypsy Quartet from 6-10pm. A limited á la carte menu selection is also available.
Fifth, the “New Year’s Eve” offers will welcome 2015 in style. Beginning at 7.30pm with a champagne reception, a six-course New Year’s Eve Dinner follows with creative gourmet selections: Lobster Tartar with Oyster Mayo, Egg Confit and Salmon Caviar; Foie Gras Duo with Brussels Sprout Salad, Chestnuts and Shallot Jam; Roasted Panettone-Crusted Black Cod with Buckwheat Puff, Marinated Mushrooms and Endives; Prime Beef Tenderloin with Duck Foie Gras, Potato Mille-feuille, Truffle and Ricotta Filled Cabbage Roll; and a special surprise dessert.
This dinner experience will be enhanced by a musical program showcasing well-known Broadway and West End classics.
Finally, “New Year’s Day” sees the Gresham Restaurant celebrate the first day of 2015 with a variety of menu selections for breakfast, lunch and dinner.
The Four Seasons Hotel Gresham Palace Christmas Market from 25 November to 30 December is open Mondays to Thursdays 1-9pm, and Fridays to Sundays 10am-10pm. On 24 and 25 December special opening times apply: from 10am-4pm.
Facebook page www.facebook.com/FourSeasonsHotelBudapest has news and information on these special events.
Completed in 1906 as an office and apartment building, the stunning Gresham Palace served as a barracks for the Red Army in less happier times and eventually fell into disrepair. But such beauty was born to rise again and it opened as a hotel in 2004 after restoration of such original details as a large staircase, stained glass, mosaics, ironwork and winter gardens. Despite the dearth of chimneys, legend has it that it is one of Santa’s favourite stop-overs in the city each Christmas Eve.