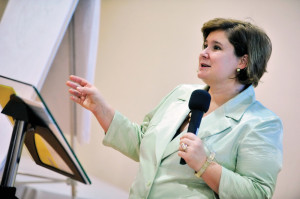 Many women have to face the decision “child or career” at some point. However, it is not only important in the economic sense that mothers, who are raising the future generation, stay active professionally. It’s much more natural today for many women that they “earn their own money”. Child psychologist Ágnes Vida explains how.

You are the Hungarian national winner of the European Commission European Enterprise Promotion Awards 2014 for Encouraging Business Start-ups by Mothers with Young Children for your project “GazdagMami” (Rich Mummy). You have two children yourself, so is that how you got the idea?

I am a child psychologist. I mainly work with infants and small children. Many of the mothers who came to me asked how I manage my work and my family at the same time. It is a fact that women with small children lack alternatives.

What do you mean by that?

Many seminars and training courses are aimed for men due to their structure, for example they take the whole day or even several days long. When you have to breastfeed a child, being away for that long is almost impossible to manage. This is why women rarely get any opportunity to train themselves.

How is your course different from the classic trainings?

My online course is made up of mini-units that take five to ten minutes each. You can manage to have such a little bit of free time even when you have a very difficult child. Furthermore, “GazdagMami” helped to build a community. The women help each other, they share their experience. The whole course is less about theory and more about practice. Instead of dealing with marketing theories and the 4P [business tool] program, we rather talk about the specific way how a student may make her web shop a success. It’s very important that we offer a lot of possibilities for communication, for example our participants can comment on the learning units and exchange them. In addition, there is a closed group for our graduates within Facebook. We have more than 1700 members there since we began to work. We have founded this group so that the women can stay in touch after finishing the course; they can help each other mutually with advice or simply share their experiences. They can discuss within the group what happens to the ladies during the foundation and the management of their enterprises.

Are five to ten minutes not too short for a unit?

One topic is of course divided into many units and the course itself takes four months. There are longer units too and at the end of each there are questions and exercises. Specifically how it works is the students listen to, for example, a half-hour unit in one go and at the end there are some exercises that they should solve.

The course can be completed from home but how do you manage to build a society that way?

Everything goes online by us, with only one exception. For the last six years there has been one lecture each month that takes place in our office. This is a kind of round-table. I speak about a topic for half an hour and then there is time to ask questions or solve problems. We have about 150 to 170 participants on each occasion. The lecture is free and some participants have been coming regularly for years. This is great because we have both experienced entrepreneurs among us and beginners who are just willing to take their first step. The round-table is especially important for starting entrepreneurs because they can learn from the experience of the others.

The “GazdagMami” course is intended specifically for women. Does that mean that in the past there weren’t enough possibilities or offers for them?

I think that most networking events and marketing conferences are almost purely events for men. Women participate only as the category “accompanied by”. These are very masculine events. Women have quite different necessities, and companies led by them have different difficulties to the ones led by their masculine colleagues. Women mostly manage much smaller companies; the goal is not to grow as quickly as possible and make millions. Women found companies in order to employ themselves and another one or two employees. The three types of businesses that are most often founded by women are book-keeping offices, hairdressing salons and beauty parlours, so typically feminine things. These companies operate for a long time, mostly for several decades. Women tend to think more for long-term. About two-thirds of the male entrepreneurs change their minds within the first three years of founding a company, while only one-third of female start-ups fail in the first couple of years.

In Germany they discuss repeatedly the female quota among board members and political party leaderships. What do enterprising women say about that?

I have talked to a few female representatives who have children themselves. It’s unbelievably hard to manage both the work at Parliament and the family. Still, it would be important that women would also get the chance to work in leading positions, both in managing boards and parties.

Men have a fundamentally different approach; they are much more target-oriented. The networking between men mostly has a specific goal, like closing a business deal or starting a cooperation, etc. On the other hand, women can often adapt to the market and its demands much better. They often understand the client better and for that reason they are better at marketing.

How well can Hungarian women reconcile entrepreneurship with family?

In Hungary we still have a relatively patriarchal system, although in larger towns the situation is somewhat less severe than in countryside regions. Still, I often see that husbands support their wives; they strengthen them on the course of realising their projects. I have also seen it often that the young mother joins the family company after a pregnancy, and takes over a marketing function for example.  Family companies can work very well. It’s very important to support women in founding companies, since these start-ups often become small family companies, in which also the husbands join in. It happened the same way in our family. When our company began to grow my husband decided to give up his job and join us. When both parents are working for the same company there will be more time spent together as a family, and that is a very important point.