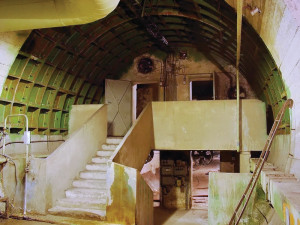 There are some places so hidden from the prying eye of the public that their existence is even forgotten for a generation or two. After spending decades in the shadowy area between historical reality and the land of legends these places return to the present to fascinate many people. So it happens that amateur adventurers fill whole forums with photo reports of ruined industrial buildings, formerly top-secret tunnels or abandoned airplane hangars from the time of the Second World War. There is such a place in the heart of Budapest.

Hardly anyone knows about one of the darkest constructions of the Cold War, an old bunker system in central Pest that covers 4,000 square metres and is 40 metres underground between Szabadság and Kossuth squares in District V: the shelter officially called F-4 and also known as the Rákosi bunker.
Built between 1952 and 1963, it was installed to protect Mátyás Rákosi, the Stalinist dictator of Hungary from 1949 to 1956, and the whole leadership of his regime in case of nuclear war. It was planned to house more than 2,000 people.
The bunker has a 150-cubic-metre water tank, generators and a complex air filter system to provide oxygen and extract radioactive dust. There is a connection to the metro to allow escape to Keleti Railway Station and from there out of the city on a special strengthened train.
The authorities managed to keep the construction works secret and the existence of the shelter remained strictly confidential for a long time. It appears that prisoners and mine workers recruited from rural areas were used, who were forbidden to communicate with the outside world. The purpose of their work was blurred by the fact that the bunker was built in parallel with the Metro 2 line.
The main exit was under 12 Steindl Imre utca but it was demolished in 2009. However, the ventilation slots of the bunker, which could also serve as escape routes, are still there for everyone to see at one corner of Szabadság tér.
Luckily the bunker was never used, so the whole facility and its technical instalments remain, in a somewhat scruffy but still intact state. The organisation responsible for the management and maintenance is perhaps surprisingly the Budapest Public Transport Company, BKV. Its technical employees go to the bunker every week to maintain all appliances.
This is a task that the BKV would happily dispose of. However, there has been no new use found for the bunker so far. One idea was to turn it into a ruin pub but the proponents had to learn that, despite the present trends in Budapest, not everything can be turned into a ruin pub: it would not comply with fire safety regulations. Nokia Siemens Networks also showed interest in renting it and there were suggestions the underground location would be suitable for growing mushrooms.
Perhaps F-4 will follow the lead of the Hospital in the Rock under the Buda Castle District, a former secret emergency hospital and nuclear shelter that was rebuilt into a museum – eternal testimonies of the Cold War, when the world was thought to be on the brink of nuclear war.