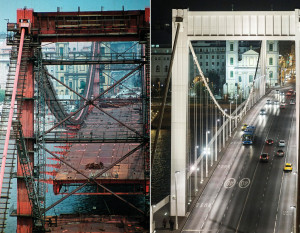 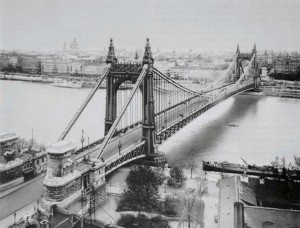 The 50th anniversary of opening Elisabeth Bridge was celebrated last Friday. The bridge is at the narrowest part of the Danube in the Budapest area, spanning only 290 metres. It is named after Elisabeth of Bavaria, a popular queen and empress of Austria-Hungary who was assassinated in 1898, about a year after the construction of the original bridge began. Her large bronze statue sits by the bridge’s Buda side connection in a small garden. The cable bridge constructed in 1964 (big picture) substitutes the original bridge built in 1897-1903 (small picture), which was bombarded in the Second World War by retreating Nazis. 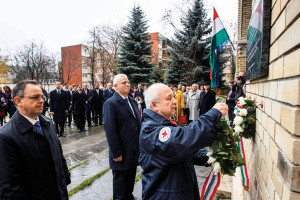 A memorial plaque was unveiled in honour of German Red Cross staff who operated a hospital in District III’s San Marco utca during the 1956 Uprising. Budapest Mayor István Tarlós said at the event that “we can only be faithful to Hungary within Europe if we never and nowhere betray what Hungarian freedom fighters died for”. He said the Red Cross of Bonn sent a consignment to Hungary that would fully equip a 100-bed hospital with medicine, bandages and essential food. German staff had operated the hospital until mid-November. Helmut Eisenhut, of the German Red Cross, noted its officers had faced continued shooting and a few of their workers had been captured by Soviet troops on 4 November and detained for days. The Uprising lasted from 23 October to 10 November.

Several producers of Hungary’s famous pálinka fruit brandy reckon that the illegally produced version of the tipple and Ukrainian vodka will be a big hit next year now that Parliament has passed new rules on home brews. In 2010 the government ruled that small producers making up to 50 litres could do so tax-free. The European Union objected and next year more excise must be paid on a smaller amount. One fear is that next year brewers will earn a mere fifth of what they can make this year, and it is doubtful that the 500 or so producers will be viable businesses, the daily Magyar Nemzet said. Now people are scrambling to make as much pálinka as possible this year, a brewer from Szabolcs said. A tax office (NAV) spokesperson said one of the most pressing tasks this year is to inspect players on the pálinka market as well as, for example, carrying out X-ray checks on train wagons and vans entering from Ukraine.

Parliament has voted through a package of changes to the 2013 criminal code including a provision for allowing people serving real-life sentences the right to plea clemency. The amendments were passed by 125-1 votes and 54 abstentions. The new clemency process, in the case of the criminal’s consent, can only apply after at least 40 years of the sentence has been served. The government said the change is necessitated by a European Court of Human Rights verdict in May. 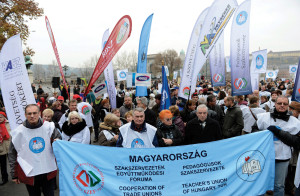 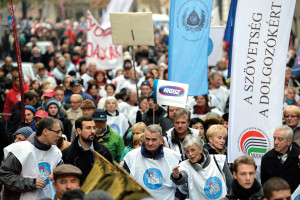 Teachers protested in Budapest on Saturday against the 2015 budget and the planned reform of public education. Head of teachers’ trade union PSZ Piroska Galló said even though 22 November is the day of public education, there is no reason to celebrate. She said if Parliament approves the 2015 budget bill and the changes the PSZ considers detrimental to education, the future of children and Hungary will be irrevocably damaged. PSZ submitted a petition to the state secretary’s office demanding that the further transformation of public education be stopped until preliminary impact studies are available and real consultations are held. Also, the government should make public its plans to transform vocational training and the central state agency for managing schools, the Klebelsberg Centre. The head of teachers’ trade union PDSZ, László Mendrey, called for all trade unions working in public education to join forces. If the government does not take the protest seriously, a strike is unavoidable, he added.

Vodafone Group is not considering selling its Hungarian assets, the group said to clarify CEO Vittorio Colao’s remark at a conference in Barcelona that Vodafone would be open to selling off non-core assets such as those in Australia, Hungary and the Czech Republic if it received the right offer. The group said Colao meant only that, as a general principle, Vodaphone was always open to possible changes to its portfolio for the good of investors. He had not intended to imply there were definite plans to sell. Colao told the conference of Vodafone’s plan to become a full-service telecoms provider, possibly expanding into fixed-line broadband and television services coupled with content providing.

PM Viktor Orbán says he will not contribute to any policy that risks a return to Cold War. As a NATO and EU member, Hungary “will be loyal to its allies” even if it disagrees with certain measures, he told the Hungarian Diaspora Council. Hungary had always approved the policy of sanctions against Russia even though it suffered as a result. Orbán pledged loyalty to allies but vowed full measures to defend the country’s economic interests. Describing Hungary as pro-Russian was “nonsense… Hungary is pro-Hungarian”. Hungary has successfully established economic self-governance and “re-buttoned the EU coat”, he said. A good European doesn’t “swallow anything” but stands up for national interests, Orbán insisted. Economic success was vital as the only way to counter negative international views of the government’s principles. It would be hopeless to try to recover Hungary’s “dented international reputation” through ideological debates because the government saw many things differently from the Western mainstream. 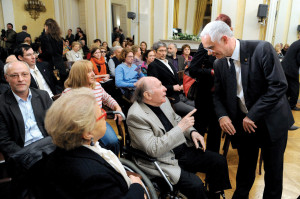 Hungary’s Nobel laureate writer Imre Kertész has been celebrated on his 85th birthday in Budapest’s Petőfi Literary Museum. Addressing the event, Minister for Human Resources Zoltán Balog called it a task for Hungary’s educational and cultural institutions to help pass on Kertész’s life work to future generations. Misinterpretations and misunderstandings surrounding his oeuvre should not be allowed to prevent readers from finding their way to his books, he said. Israeli conductor Daniel Barenboim and Austrian theatre dramaturg Hermann Beil greeted Kertész in video messages.