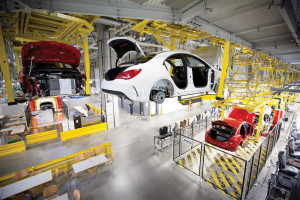 The automotive industry is by far the biggest beacon of hope for the Hungarian economy. It generates growth, represents one fifth of export performance, namely almost EUR 15 billion annually, and provides 115,000 jobs in about 700 companies. In this Budapest Times series we look behind the scenes at the three largest automotive producers, which completed 450,000 cars this year, as never before in the history of Hungary. Following the first article about Audi Hungaria Motor Kft. (BT Nr. 48) we turn to Mercedes-Benz Manufacturing Hungary Kft. in Kecskemét, the youngest Hungarian car factory, which was built in the middle of the global economic crisis.

The Daimler concern announced on 18 June 2008 that it wanted to build a factory to produce compact cars in Kecskemét, the town in the Hungarian Puszta. A month later they had already signed the agreement with the Hungarian government for an investment of EUR 800 million. In autumn that year, when the global economic crisis broke out, there were doubts whether the premium producer from Stuttgart would carry out the large project under these circumstances.
It was soon discovered though that the demand for premium cars did not decrease – quite the contrary. Thus the automotive factory with the most modern and environment-friendly technology could be built on the greenfield (literally, since 450 hectares of farmland south of the Bács-Kiskun county capital was chosen for the project), and inaugurated with a celebration in March 2012.
Mass production started with the new generation of the B-class, which was built in cooperation with the parent plant in Rastatt, Germany, and served as a trial run for the new location in Hungary, before the Daimler Group entrusted the plant with the exclusive production of an entirely new model, the four-door Coupé CLA.
This summer – less than 16 months after the start of mass production – celebrated its first major anniversary: the shipping of 100,000 CLAs worldwide. At the end of September the plant produced its 250,000th car since the start of production in 2012; this nice round number was thus achieved in only 2.5 years.
Thanks to the huge demand the number of employees in Kecskemét was raised step by step to 3,500, working three shifts since May to serve the enormous demand. When Dieter Zetsche, the CEO of Daimler AG, expressed his hopes at the opening ceremony of the series production of the new model that the CLA may be Hungary’s most popular export article, everyone thought that it was just a wish. However, given the continuous boom in the turnover of the coupé, the CEO’s ambition does not seem so daring any more.
Accordingly, paprika will no longer be the landmark of Kecskemét. It will be dislodged by a Mercedes with an inscription saying “Made in Hungary”: a top-quality car being built in larger numbers than planned. 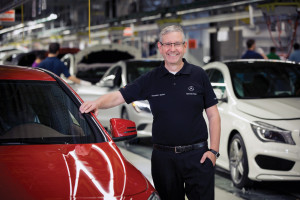 Factory director Thomas Geier has every reason to smile: at the end of September the plant produced its 250,000th car

The clients of Mercedes are ten years younger

The new compact of Mercedes-Benz was such a success that Kecskemét can hardly keep up with orders. To satisfy the high demand they introduced a multi-shift workday based on the German model, which allows the business operation to run in a more flexible way.
This contributes to the group’s strategy, namely recapturing the number one position among the world’s premium manufacturers until 2020. More than 80,000 cars have already been sold of the newly set-up compact class, and every eighth compact model from the house with the big star is an exclusive model of the CLA from the Hungarian town of Kecskemét.
This “Hungarikum“ is doing particularly well overseas: In the United States the sleek Coupé won over 80% of new buyers from other brands and the average age of Mercedes clients went down from 55 years to 45.

Profits right from the start

Mercedes-Benz Manufacturing Hungary Kft. looks solid from an economical point of view as well, and has been from the beginning. Although production only began at the end of March 2012, turnover already hit the billion-euro mark in the 2012 business year.  Around 40,000 B-Classes rolled out from the brand-new plant within nine months. They have been even earning profits from the beginning (EUR 54 million in 2012, EUR 66 million in 2013). In the past year they have produced 109,000 B-Class cars and CLAs and turnover reached EUR 2.1 billion. Mercedes-Benz Manufacturing Hungary Kft. became the fourth-largest exporter in Hungary.
In Kecskemét they are already preparing for production of the fifth compact model of Mercedes-Benz, the CLA Shooting Brake, which will hit the market next year. The combi-version of the CLA will be the third model on the product range of the Hungarian branch and, the same way as the Coupé, it will be produced exclusively in Hungary for the global market. With this, capacity at the plant, which has been operating in three shifts since May, should be optimally utilised for a long time.