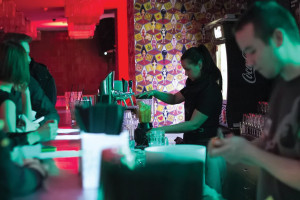 There is a special kind of party in 62 Teréz körút each Thursday morning. Not alcohol and cigarettes; these parties are healthy, where visitors can start their workday with music, dancing, yoga and a lot of fun. The Budapest Times joined the first party.

Budapest is waking up. The first grocery stores are opening; people are on the way to work. The night is over, the morning just starting. While at most places the party is already over, the bass is booming in the Sunrise in District VI’s 62 Teréz körút. You can hear the loud music when you pass by on the street. This is in contrast to the rest of the program. The party is not meant for late risers, because you can enter the Sunrise from 6.30am. “It’s not easy to wake up so early… not everyone makes it,” says one of the Budapest Morning Party’s organisers, Zoltán Varga.
People are on their feet to house-music on two dance floors. The party location brings back the charm of the 1980s. The Morning Party crowd is a colourful mix: a serious man in a suit, youngsters and a mother with her daughter. You would be looking for alcoholic drinks here in vain; this is how these parties are supposed to be.
“This is not an after-hour party, meaning it’s not about continuing another party,” Varga says. “It’s just the opposite.” The DJ used to live in Los Angeles for a long time and has seen Morning Parties around the world. The trend began in England and spread throughout Europe and then the world, and it has many followers. Varga and his colleague Tim Metz are now launching the concept in Budapest.
The basic idea is simple, to get people’s circulation moving in the morning. “Many people get up early to do some sports before going to work,” says Varga. “With us they can do it while having a lot of fun at a party.”
It’s about starting the day in a healthy way. Besides the danceable music guests can enjoy yoga courses, a bubble machine, balloons and hula-hoops. “It’s a good thing not to take yourself so seriously,” Varga smiles.
A balanced breakfast with freshly squeezed juices, fruit, small sandwiches and croissants is available. The party-goers certainly seem to be in a good mood despite the early hour. They are having a lot of fun and the no-alcohol rule means it is open for all age groups. 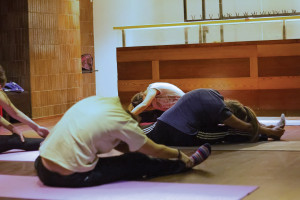 So a mother has brought her ten-year-old daughter and both are playing with some hula-hoops. “Parents are welcome to bring along their children,” says Varga. “Many of them used to go out before they became parents but now they cannot make it. We are offering them an alternative.”
There were around 80 people at the first party. The peak time was 7.30-8.30. After that many people left happily for work. The feedback was good: “They told us that they liked it and they want to come back next week.”
However, this is only the beginning. The Morning Parties will become larger and more diverse. “We are trying to invite national and international DJs and we are looking for further partnership with yoga and fitness studios,” the organisers explained. The offer of attractions will be widened by zumba courses and all kinds of yoga classes.
The aim would be to develop a kind of membership card like they have in a fitness studio, so that everyone would be paying a monthly fee. Until then you can either pay HUF 1000 for a prepaid ticket, or register yourself in the Facebook group and enter for free. The doors of Sunrise are open until 10.30. All the guests look happy.
The organisers are happy as well. “This is a great experience, there is nothing quite like it,” organiser Tim Metz says. “I had a great time and I feel great”. A party is indeed a rather original way to start your day. All you have to work on is getting up a bit earlier.