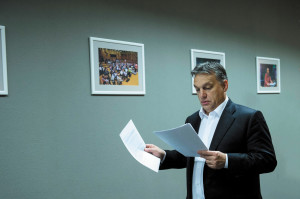 Prime Minister Viktor Orbán has been named as a runner-up in corruption after Russian President Vladimir Putin by the Organised Crime and Corruption Reporting Project (OCCRP), a non-profit organisation of investigative centres across the globe, based in Sarajevo. He had to share second place with Montenegrin Prime Minister Milo Djukanovich (pictured right), while OCCRP considered Putin’s win a lifetime achievement award.  (Note: according to the daily Magyar Nemzet, OCCRP is partially financed by György Soros)

Organised Crime and Corruption Reporting Project’s Person of the Year award is given annually to the one who does the most to enable and promote organised criminal activity and corruption. In fact the winner is not necessarily a person, because in 2013 the award went to the entire Romanian parliament after it accepted in December 2012 a criminal code that would grant government officials immunity from charges of corruption.
In 2012 the winner was Ilham Alijev, President of Azerbaijan, who is referred to as a dictator and a mafia crime boss by many analysts, though Orbán declared Azerbaijan an example to follow in November 2014 when the two countries made an agreement of strategy that, according to Orbán, is good for both Hungary and the European Union.
Editor of OCCRP Drew Sullivan explained that Putin’s win might also be considered a lifetime achievement award: “He has been a real innovator in working with organised crime. He has created a military-industrial-political-criminal complex that furthers Russia’s and Putin’s personal interests. I think Putin sees those interests as one and the same.”
Executive director of OCCRP Paul Radu said Putin and other Russian politicians who previously worked for the security or military services fused a Cold War mentality with modern organised crime strategies and technology to create a new level of transnational organised crime. 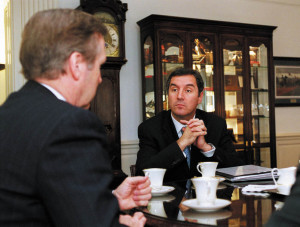 Organised Crime and Corruption Reporting Project says the Russian money-laundering system backed by the government is spread worldwide, from which income is given to Russian and other Putin-supporting politicians. Independent local media and politicians are oppressed, and at the end of 2014 Aleksei Navalnij, a political adversary of Putin, was sentenced to prison, coincidentally on a charge of corruption.
OCCRP has been giving out awards since its founding in 2007, as well as revealing several corruption issues in Europe, Central Asia and Latin America. In 2013 there was the Magnitsky affair, when Sergei Magnitsky revealed a fraud by Russian tax officials and police officers, uncovering the theft of USD 230 million.
The organisation aims to help the public understand how organised crime and corruption are present in their everyday life, and to improve reporting on these issues.