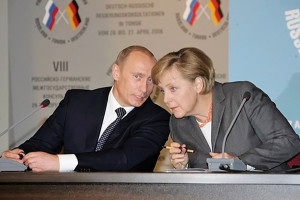 Pending visits by German Chancellor Angela Merkel and Russian President Vladimir Putin are in “different phases”, Prime Minister Viktor Orbán has told public radio. Merkel’s visit has a date and agenda set but Putin’s is only planned, with no decisions yet on the time or topics to be discussed.

Political and economic cooperation with Russia should be kept going despite the current tense situation over Ukraine, Orbán said, adding that a visit by Putin would be “sooner than later” this year.
Merkel’s visit had different connotations, and because he met her every two months in Brussels this appeared “less unusual” for Hungarians and easily fitted into diplomatic practices. However, in response to opposition calls for Merkel to hear them out during her visit, Orbán said she should not be treated as “someone taking requests”, because this is offensive.
Hungary needed to keep itself “away from conflicts” and remain a good ally in the European Union and NATO, while not letting itself “be dragged into a Cold War-type situation” by the Russians or the Americans. Hungary needs secure ties with both Germany and Russia, Orbán insisted.
Opposition party Együtt (Together) said the government should consult with the parliamentary parties on the Putin visit’s possible agenda. Együtt called on Orbán “not to do Putin another favour” but to renounce the agreement the Hungarian government concluded with Moscow last January on upgrading the Paks nuclear power plant and a related EUR 10 billion Russian state loan. Noting that several of Hungary’s gas storage facilities would be sold to Russia’s Gazprom under the agreement, the party said the deal did not serve Hungary’s interests and would further increase the country’s energy dependence on Russia.
Green opposition party LMP called on Orbán to tear up the Paks contract. Bernadett Szél, the party’s co-leader, said a move to scrap the agreement would be the only positive outcome of a visit by the Russian president. Speaking about Hungary’s long-term gas contract with Russia, Szél said Putin could use the price of gas as a political weapon. She said Orbán should refuse to sign an agreement that fixes prices Hungary pays in the long term.
The Dialogue for Hungary party (PM) said it would initiate a joint demonstration to be staged by “democratic opposition parties” together with civil groups against the visit. The party will invite the Socialists, Együtt, the Democratic Coalition, LMP and the Hungarian Liberal Party, as well as organisers of recent civil demonstrations, party co-leader Tímea Szabó said.