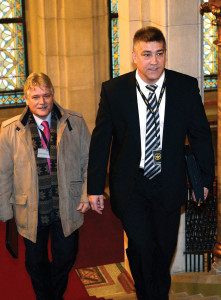 Hungary’s Counter Terrorism Centre (TEK) is working at top speed following the terrorist attacks in Paris. Deputy director Zsolt Bodnár says TEK is analysing “every single detail” of the events in France, which will take weeks or even months to complete.

The possibility of an Islamic terror attack in Hungary is a different situation in Eastern Europe than in Western Europe, Bodnár (pictured left) said. Radicalism is not so widespread within the Moslem diaspora in Hungary, and the national composition of the people following the Islamic faith is also different in this country.
Most members of the Arabian society in Hungary arrived before 1989, they speak Hungarian, are economically active and are reasonably integrated into society, he said. The biggest problem in Western Europe was that the second generation of immigrants could not integrate. Despite the low possibility of a terrorist attack in Hungary, TEK was in contact with foreign secret services including the French organisation.

Security policy expert and university lecturer György Nógrádi has warned on Kossuth Rádió that if no political measures are taken following the mass murder at the French satirical magazine Charlie Hebdo, radicalism will threaten to escalate in the co-existence of the Muslim minorities and the European majority.
Nógrádi said that while the radical National Front party led by Marine Le Pen is on the rise in France, Sweden recently published statistics according to which 77% of all crimes in the country are committed by Muslims, who make up 4% of the population in Sweden. There are many voices in the Islamic communities on the continent who have welcomed the assassinations at Charlie Hebdo, he said.
If European politics did not address these “serious challenges” with “serious answers”, the alarming processes would sooner or later reach a state where they could not be controlled any more.  Both parties were looking at each other with increasing suspicion. In the case of continuing attacks, the whole continent would have to face incalculable consequences, Nógrádi said.

He criticised European immigration policy in an interview with Inforádió. “It’s simply ridiculous that we are taking in immigrants who we do not need. We rescue them from unguided vessels on the open sea, this is only natural. However, no one thinks about bringing these immigrants back to where they belong. When they are escaping from a country torn by civil war, that’s something else, but most of them come from Africa, simply fleeing from hunger.”
Nógrádi is convinced that famine in Africa cannot be solved as an “immigration issue”. “If a humanitarian organisation would hear what I am just saying, they would surely think how horrible this is. Yes, it is horrible but this is reality. We cannot let in several hundred million starving Africans. Europe is overcrowded. The politicians who do not take that into account will lose the next elections, and those parties will be in advantage which are questioning the current immigration policy.”