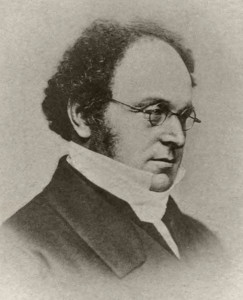 For most of my adult life, by virtue of the family name I was born into, I’ve been an unintentional victim of Murphy’s Law, the adage which asserts that if anything can go wrong, it will go wrong. I was curious enough at one point to check to see which of my ancestors might be blamed for saddling me with this rather pessimistic outlook, and discovered, much to my surprise, that it wasn’t a Murphy at all.

One hundred years before I was born, mathematician Augustus De Morgan (pictured) apparently wrote: “The first experiment already illustrates a truth of the theory, well confirmed by practice, what-ever can happen will happen if we make trials enough.” Those in the know reckon that Murphy was born when the name De Morgan was lost in an international game of Chinese whispers, misremembered, misreported and generally mistaken for Murphy. And so we have Murphy’s Law.
Last week, I came across a more contemporary law – Godwin’s Law – which states: “As an online discussion grows longer, the probability of involving Nazis or Hitler approaches 1.” So, no matter what the topic under discussion, Godwin, an American lawyer, reckons that if it goes on long enough, eventually someone will compare someone or something to Hitler or Nazism.  What an interesting observation.
Two other things happened last week that got me thinking.
First, I finished “In the Garden of Beasts: Love, terror and an American Family in Hitler’s Berlin”. In it, author Erik Larson, a noted historian and able writer, gives “a stunning, eyewitness perspective on events as they unfold in real time, revealing an era of surprising nuance and complexity. The result is a dazzling, addictively readable work that speaks volumes about why the world did not recognise the grave threat posed by Hitler until Berlin, and Europe, were awash in blood and terror.” (I couldn’t have said it better myself so I’ve borrowed the words of an anonymous reviewer – were I to add a descriptive to it, I’d choose “chilling”.)
Second, I found myself in conversation with three people who regularly visit Budapest for various reasons. All three (none of whom know each other, to my knowledge), in answer to my question as to whether they thought the city had changed, said yes. One, a musician who has been coming here for twelve years to play a gig, said they noticed that people seemed to be more on edge. They mentioned a pervasive sense that something (and not something good) is about to happen.
Another, who has come back a few times since moving home, said it didn’t feel quite as safe as it used to be. They couldn’t point to anything specific; it was simply a feeling. But the comfortable familiarity that they once enjoyed had been replaced by a sense of no longer really knowing the place.
And the third commented on the public attitude and a welcome that wasn’t as great as it used to be, infused as it was this time with a certain wariness, peppered with a degree of resignation.
New laws (I’d be all for shops not opening on Sunday were it a vote on whether to introduce it or not, but to rescind?), new taxes (still can’t fathom the logic of the tax on solar panels!) and new proclamations from on high might, when taken individually, amount to nothing, but if added together, could they weave a different story?
And while, for the record, I’m not drawing any comparison between 1930s Berlin and Budapest in 2015, there is a tiny, niggling something at work in my heart that says tomorrow might be a better place if, collectively, we paid more attention to what is going on today. Could I make that the new Murphy’s Law or has someone else already snagged it?

Mary Murphy is a freelance writer and public speaker who is often victim of her own reality. Read more at www.stolenchild66.wordpress.com