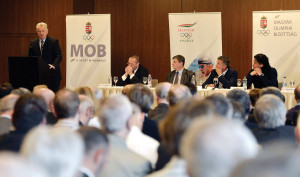 Budapest once again looks set along the path to bid for the Olympic Games, as the Hungarian Olympic Committee (HOC) took an overwhelmingly supportive vote last week to move ahead with a feasibility study ahead of the September deadline to submit bid proposals to the International Olympic Committee (IOC) for the 2024 Summer Olympics.

While not the first, or even the eighth, time that the city has floated the idea of inviting the world’s best athletes to our friendly confines, there seems to be a growing confidence and sense of enthusiasm surrounding Budapest’s 2024 bid. With modern sporting facilities already under construction, an efficient tourist infrastructure and a supportive public – not to mention recent IOC changes to the bid process to make it easier for smaller centres to bid – a 2024 bid seems to be shaping up as a legitimate contender in what looks to be a crowded field.
The Budapest Times looks ahead at what decisions the HOC has made, why the 2024 bid differs from past experiences and what lies ahead for the bid team. As evidenced by the onslaught of media at the announcement, this is a story that will stick around for the foreseeable future.

Budapest is no stranger to bidding for the Olympic Games. Word has it that the city even offered to host the first edition, back in 1896, in what would eventually be awarded to Athens, Greece. A bid in 1916 was scuttled because of World War One, just as the 1944 bid was abandoned when World War Two broke out. The city was a frontrunner for the 1920 Olympics but that was before the Empire sided with Germany in WWI.
The city would not come close in bids for either the 1936 Games awarded to Berlin, or the 1960 Games awarded to Rome. In fact, it wasn’t until the turn of the 21st century before Budapest would renew its Olympic dreams. First floated by then-prime minister Viktor Orbán before the 2002 elections and led by groups such as the Budapest Olympics Movement, headed by former chairman of the Budapest Stock Exchange Attila Szalay-Berzeviczy, the city first looked at the 2012 Games, then 2016 and then 2020.
A 2024 bid looked far from certain only a few months ago when Budapest Mayor Istvan Tarlós called the idea both “unrealistic” and “unviable“. Much has changed since that time however, as the IOC passed a series of reforms entitled Agenda 2020 designed to make hosting the Games easier on cities by reducing costs, providing more support and allowing for host cities to take advantage of pre-existing venues in nearby communities.
As outlined in some detail at last week’s HOC meeting, these changes have caused a change in mood surrounding the Hungarian bid.

The IOC adopted the changes in light of the debacle that has been the bid for the 2022 Winter Olympics. Several cities, including all of the favourites, were forced to withdraw their bids due to the costs involved and/or lack of public support.
The hastily adopted changes now allow bid cities to hold events outside of the main host city, which would be ideal for a Hungarian bid. For example, several venues set to be used for the 2017 European Youth Olympic Festival slated to be held in Győr could be repurposed as part of the bid, and can’t you just picture the sailing events happening on scenic Lake Balaton? Hungary’s compact size would be ideal for spreading out the Olympic football tournament to several cities outside Budapest. In addition, several venues within Budapest have also been recently renovated, such as Groupama Arena and the Papp László Sports Arena.  The new Ferenc Puskás Stadium is being developed with the idea of hosting Olympic Opening and Closing Ceremonies in mind.
As Zsigmond Nagy, the international relations director for the HOC, points out: “Numerous multi-sport venues, sport fields, swimming pools, football stadia and school sport venues and fields have [already] been built and are being built now as well.” These facilities, along with Budapest’s well-developed tourist accommodation market and efficient transportation system, give organisers a legitimate sense of hope that an Olympic bid is feasible.
Organisers stressed that they would go ahead with a bid only if they had the full support of both politicians and public opinion alike. While neither the City Council nor the federal government have yet commented, results from an Ipsos poll conducted last month at the behest of the Budapest Olympics Movement show strong support among the general population.
The survey noted that fully 60% of Hungarians are supportive of a Budapest Olympic bid and 54% believe the city is capable of hosting such an audacious endeavour. More importantly, more than two-thirds said they would be happy to contribute 1% of their taxes to support the bid, while 60% said they would be willing to contribute a few thousand forints a year in addition to the tax.
This was music to the ears of the HOC, which voted overwhelmingly in favour (125-1) of moving forward with the feasibility study. An Olympic Patronage Board has been established to report back to the HOC by May. This will give plenty of time to complete the application before the September bid deadline, so long as all the necessary resources and support have been secured.

Of course, no Olympic bid happens in isolation and 2024 is no different. Both Rome and Boston have already declared their interest, while other cities that are considering a bid include: 2022 World Cup host Doha, Qatar; 2015 European Games host Baku, Azerbaijan; 2020 Summer Olympic runners-up Istanbul, Turkey; 1936 Summer Games host Berlin, Germany; 1924 Summer Games host Paris, France; and a bid from 2010 World Cup hosts South Africa.
Right now the frontrunners are considered to be Boston, as the USA will not have held a Summer Olympics for 28 years by then, and Paris, as it would mark the centennial of the last time Paris hosted the Games in 1924. Indeed, even Szalay-Berzeviczy seems lukewarm to Budapest’s chances as he mentioned in late 2013 that the 2024 bid should act as a “warm-up” for a 2028 bid.
When, in an exclusive interview, we asked Guzstaf Bienerth – a consultant who has worked on past Budapest Olympic feasibility studies and presented his findings at the HOC meeting – whether the 2024 bid was indeed just a warm-up, he mentioned that in 2024 it will have been 12 years since Europe last held the Summer Games and it will be 16 years in 2028, “We want to have the best European bid,” he said. “We want to be ready for when the IOC decides to come back to Europe.”
This polished answer shows that there has already been a good deal of preparation put into a Budapest bid. It’s worth noting that Hungary has a very rich history in summer sports – the country sits eighth in the all-time Summer Olympics medal count, ahead of such sporting giants as China, Australia and Japan. In fact, out of the top 14 medal-winning nations at the Summer Games, Hungary is the only one yet to host the prestigious event.
With our rich Magyar history, our impressive sporting background and our established tourist infrastructure, it’s not hard to see how the Olympic Patronage Committee could develop a competitive bid. What remains to be seen, and what the committee will be looking at, is whether it can be done at a profit.
Certainly the public seems to think it’s a good idea; nearly three in four people say the event would allow the country to highlight the “historical successes of Hungary” to the world. These successes would need to be rolled into a compact and cost-efficient package that would allow the city to not only compete with sentimental bids such as Paris, but also with powerhouse bids from Boston or Rome.
We’ll know more by May, when the committee is set to finish its report.