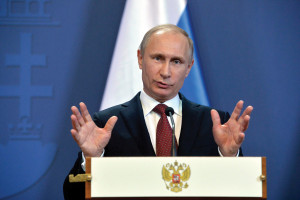 We have fulfilled all requirements of the Hungarian partner, Russian President Vladimir Putin said in an obviously relaxed manner at the international press conference held with Prime Minister Viktor Orbán on Putin’s visit to Budapest this month. We have secured the energy supply for families and the gas supply for companies, Orbán emphasised.

Vladimir Putin and Viktor Orbán negotiated for more than two hours, and in the end they even took the time for a working lunch. The result was the press conference held in full consensus. First, Orbán announced that Hungary needs Russia, the Russian market and their energy; the sanctions against Russia harmed international relations; this was why it was necessary to refortify economic cooperation now.
In this context Orbán urged clarifying the relationship between the European Union and Russia. “It’s nonsense to exclude Russia from Europe,” he pointed out. The security of the region could only be guaranteed together with Russia and for that you must negotiate, negotiate and negotiate.
Both politicians were doing well at that, so Orbán was able to announce that there are only a few technical questions remaining open about the long-term gas supply contract. In any case, the gas supply for families and companies was secured.

Just like Finland and Slovakia, Hungary is also getting its gas supplies exclusively from Russia! For reference, this ratio in Austria is 75% and in Germany 43% (according to data from 2013). The supply points available in the north-eastern, northern and north-western parts of the country would theoretically allow the diversification of the gas supply. In reality however, every gas delivery, no matter whether it arrives through Ukraine, Slovakia or Austria, is bringing us Russian gas.
To ease this one-sided dependence, EU member states such as Austria and Hungary wanted to introduce the Nabucco Project. The plan was to pump natural gas from the region of the Caspian Sea across Turkey and the EU states Bulgaria, Romania and Hungary to arrive in Austria, at the central distribution centre of OMV in Baumgarten near Vienna.
They have also dreamed about gas from Turkmenistan and even from Egypt, Iraq, Israel and Iran. However, the consortium seated at the Caspian gas source decided on the TAP Project, which ends in south Italy and will supply the Balkan region.
The dream of alternatives, namely non-Russian gas sources, was over for Hungary. (From time to time there is talk about liquid gas terminals in Poland and Croatia. Hungary could profit from any project enhancing competition, however it’s sure that the country cannot have influence on the construction process or price formulation.)
This is why after the Nabucco Project failed; Hungary began to support the completion of the South Stream gas pipeline so strongly. However, this project would not have reduced the dependability on Russian gas, since we are talking about a project financed by Gasprom.
At least it would have helped bypassing the crisis hotspot Ukraine. It is known that the long-term dispute between Russia and Ukraine led to gas supply problems in Hungary twice in recent winters. (The second time the country was better prepared, and its Serbian gas storage was able to help out in times of crisis.)

President Putin made it clear at the press conference in Budapest that it was not Moscow which stopped South Stream but Brussels. “We did not give up our plans, they did not allow us to carry them out,” he said. At the same time Putin confirmed that Russia is still willing to carry Russian gas to Europe across Turkey.
Hungary is quite logically showing keen interest in the “Turkish Stream” from the beginning. As Orbán said: “Whatever solution will take the place of the failed project, Hungary will seek the possibility for cooperation in terms of construction and management of the project.”
Because it is in the interest of the country to add on gas supplies coming from the southern direction. For Hungary a route leading from Turkey over Greece, Macedonia and Serbia would be ideal. Orbán did not mention Bulgaria at all, however Putin said that “if there is a logistic solution” they would also be ready to supply Bulgaria with natural gas. (Sofia succumbed to EU pressure and took a position against South Stream. When Putin declared in Ankara that the project was over, he named primarily the EU and Bulgaria as responsible.)

No progress on diversification of gas sources

So Hungary has not managed to make progress in the diversification of its gas sources thus far. The completion of one of these complex and extremely costly projects will be a question of years; years during which people and companies are depending on energy, and energy that they would like to obtain – which is also a priority for Orbán – in a safe and possibly cheap way.
It was not a coincidence that he mentioned that Russia is practically a guarantee for the realisation of his policy of utility cost cutting – the companies will also be able to experience sinking energy prices in the future.
The gas prices for Hungarian private households are back to the price level of 2009, the electricity prices are even back to the level of 2007. We have to mention that under the Socialist-Liberal governments the energy tariffs were always increasing. Between 2004 and 2008, for example, gas prices more than doubled while electricity became “only” one third more expensive.
Energy tariffs reached their highest level in 2012 under the leadership of Orbán before he declared a new policy and carried out a decrease of over 20% in the cost to private households in three steps.

Paks as a pledge of cheap energy

According to the prime minister, the pledge for the continuation of this policy will be the nuclear power plant in Paks. The four power plant blocks that were installed in the 1980s with the help of Russian technology provide 40% of Hungarian electricity. While the lifetime of the system cannot be extended for ever, last year there was a “secret agreement” created. You can call it secret for a reason because the partners, Orbán and Putin, published only a little bit of information about it.
In Budapest this month Putin said for example that this project will allow reducing energy prices in Hungary and can create 10,000 workplaces. He estimated the cost of the project at around EUR 12 billion, which will be financed by Russia up to 80% with “extraordinarily beneficial” conditions.
The Russian state-owned nuclear concern Rosatom is considered especially active in the creation of new nuclear power plants worldwide. There will be two new modern reactors each with a capacity of 1,200 megawatts built in Paks by the Danube. According to critics, this will be expensive for Hungary, while the opinion of the government is just the opposite.
The long-term gas supply contract, which has just been “flexibly extended”, promises a more easily predictable cost. The contract, which was signed 20 years ago – as Orbán said, “not by us” – says Hungary must pay for a fixed amount of gas each year no matter what happens. However, the nation’s demand sank from the former 14 billion cubic metres to about half of this.
On top of it all, the gas price is tumbling on the market, which makes the fixed Gasprom deliveries a bad deal for Hungary. According to the contract, Budapest has to pay the outstanding amounts of billions (even if expressed in EUR) by the end of the year. This danger has been put off for now – as Putin said, they have fulfilled all the Hungarian wishes.
Hungary will only have to pay for the delivered amount of gas for the coming years – however, the price remains classified.