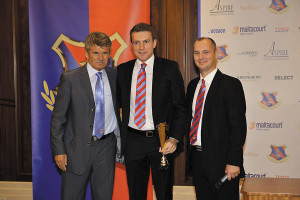 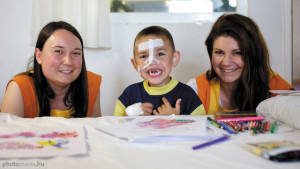 You’ll be forgiven if you have not heard the intriguing story of the defiant football team from Vác, a small town of 35,000 just 35 kilometres north of Budapest. Only the most ardent Hungarian football fans are likely aware of the tumultuous ride the team has taken since British owner John P. Marshall took over the reins in 2012.

This once-proud squad, Hungarian champions only 20 years ago (in 1994), now finds itself battling for promotion to Hungary’s second-tier NB II league. Yet the tale of Vác FC is a fascinating story of trial and perseverance; and the ultimate renaissance of a formerly formidable football club.
From the height of the Hungarian football world, to its messy transfer of ownership and the resulting two-tier demotion, to its recruitment of a Hungarian coaching legend and subsequent rise to the verge of Hungary’s second division, The Budapest Times takes a look at the renaissance of a Hungarian football team – the story of Vác FC.

The club’s rich history dates to the turn of the 20th century when the football team was just one spoke in the Váci Sportegyesület (Sports Association)’s wheel, alongside athletes in cycling, fencing, gymnastics and tennis. As the Hungarian premier league at the time only featured clubs from Budapest, Vác FC competed in regional championships and saw some early successes with championships on both sides of the First World War in 1913 and 1924.
When the premiership rules changed to include teams from outside the capital, the small team from Vác was not wealthy enough to move to the professional division and eventually wound up merging with another team from the small city just to stay competitive in division two.
The team languished in the second division NBII for most of the next 50 years until 1989, when they recruited one János Csank, a man who would soon become one of the most decorated coaches in Hungarian football history. Under Csank, the team would see its “Golden Years” – regularly competing near the top of the table in the premier league.
By 1991, Vác FC had qualified for their first of three Hungarian Cup finals in five years, all of which they would eventually lose. At the same time, the team would finish runner-up in the Hungarian premier league in both 1992 and 1993.
However, under Csank’s tutelage, Vác FC was finally able to stand atop the national football world in 1994, winning the premier league and qualifying for the 1995 UEFA Champions League, where the squad would fall to Paris’ premier team: Paris Saint-Germain.
Csank would soon be wooed by a wealthy Greek club before returning to Hungary in 1996 to coach the national team in their near-miss effort to qualify for the 1998 World Cup. While Csank would go on to become one of the most recognised names in the world of Hungarian football, Vác FC stumbled back to mediocrity by first being demoted to division two in 2000 and then division three the following season.
Returning to division two once again in 2003, the team would struggle through multiple changes in leadership until the drama of 2012 caused the team to crash.

Like with any good story, the heroes need to overcome a grave ordeal; and in the case of Vác FC it wouldn’t be an on-pitch battle that decided the fate of the team, but the off-field transfer of ownership from József Héger to British expatriate John P. Marshall.
A lifelong football fan from the British city of Liverpool, Marshall moved to Budapest in 2006 to continue his career in real estate development. Having grown to love the market nearly as much as the sport of football itself, he pursued a lifelong dream by acquiring the famed football club in Vác.
He purchased the team from Héger early in the 2012-2013 season, looking to learn this new business and to ultimately reclaim the glory years of 20 years past. He soon realised he was in for the fight of his professional life.
To make a long and quite complicated story short, the transfer did not go smoothly. Marshall paid Héger, took on the financial commitments and expected the team’s licence to be transferred at the season’s end.
Héger, ignoring the terms of the contract, publicly proclaimed that Marshall’s funds were simply a financial investment and not towards the purchase of the football club. An ugly battle played out in the Vác FC front office in which television revenue and players’ salaries disappeared.
The situation came to a head during the quarter-finals of the 2013 Hungarian Cup. Vác FC were set to host Videotron – the top team in Hungary at that time – at the town’s quaint, 12,000-seat Városi Stadion. When the biggest draw in Hungarian football arrived, they found a Vác FC team with no registered coach or even kits to play in, and a stadium covered in snow that was in no position to host a game. An embarrassment in front of the national TV cameras, the Hungarian Football Association was forced to step in. 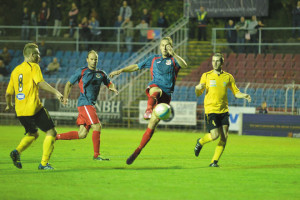 In fiction, it is established canon that a hero needs to die before he is reborn, and that was literally the case for Vác FC. Following the fiasco at the Hungarian Cup, the Hungarian Football Association launched an investigation which discovered that Héger had breached multiple licensing regulations.
This resulted in the revocation of the team’s licence and its disqualification from division two of the National Championship. As of March 2013, the storied team from Vác – once the top of the Hungarian football world – officially ceased to exist. But, as they say, “from the ashes rise the phoenix”, and so was the case with Vác FC.
Acquiring a licence in the fourth division, Marshall and his players began the long slog back to the pinnacle. Like any good renaissance, the team started with a whole new look. A sleek, redesigned logo featured atop fresh new kits that were provided to players who had finally received their salary payments.
But the real coup de grâce was Marshall’s recruitment of one of the most influential pieces of Vác FC history – the legendary János Csank. It was under Csank that the team saw its most glorious seasons, and the team has enjoyed renewed success under his most recent tenure.
Winning division four at their first attempt and currently close to triumph in division three, the scrappy team is aiming for back-to-back promotions. Vác FC currently sits in first place with a 10-3-2 record, five points clear of their nearest competition. 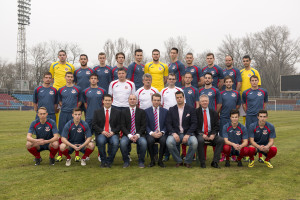 The future of Vác FC

So where does the storied franchise go from here? Marshall has big plans, including a renovated stadium, an improved football academy and eventual promotion to Hungary’s premier division. More than anything though, he has concentrated on connecting the team to the community, and trying to regain the trust and respect for the once-proud institution.
Projects as simple as creating a family section at the stadium or sustaining one of the most vibrant social media presences in all of Hungarian football have provided the foundation in this regard. However, it is initiatives such as “Vác FC in the Community” that are really connecting the team with its fan base.
“Vác FC in the Community” sees the team support several charitable initiatives, such as having the players bring presents to sick children at Christmas, leading blood donation drives or even presenting flowers to the women of Vác on International Women’s Day. The goal is to make Vác FC a pillar of the town; creating a fan-friendly environment where everyone is welcome to watch the team.
The club has plans to upgrade the main building of the stadium, as well as to install a sleek, wooden cantilever roof to shield fans from the harsh elements. Kindergarten pitches will soon open alongside and to complement its ambitious football academy, so that parents can leave their children with specially trained child-minders as they sit back and enjoy Vác FC on the field of play.
Success on the pitch is high on the mind of the team, as the club’s collective vision sees a return to the premier division in the next five years. And what a triumphant return it would be – only a few years removed from the death of this vaunted Hungarian club. What we are witnessing right now is the renaissance of a football team – it’s the story of Vác FC.