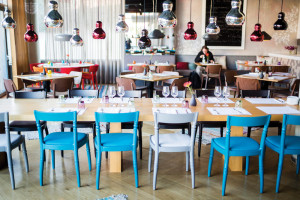 Something is happening in the Budapest culinary scene. A few years ago foreign cuisine in the Hungarian capital basically meant an option between spicy or yoghurt sauce on your gyros. Then Sziget founder Károly Gerendai had a thought and established Costes in 2008. Two years later the restaurant received a Michelin star and it has successfully defended it ever since. Another year later Onyx was starred, last year Borkonyha received recognition and just a few days ago Tanti (Auntie) became a member of the elite. According to the 2015 edition of the Michelin Guide “Auntie is located in the corner of a pleasant little shopping mall and comes complete with an appealing terrace. It’s light, bright and simply kitted out and offers a concise menu of attractively presented, accomplished dishes. Classic combinations are respected but there’s also originality to be seen”. What’s even better about this year’s new entrant is its price range: Auntie only belongs to the elite when it comes to the quality of food. The menu at Costes is ridiculously good but ridiculously expensive. Onyx and Borkonyha are more affordable but Tanti offers lunch meals for as low as HUF 3,200. That’s slightly more than EUR 10 and I can tell you first-hand that the food is very good. So go ahead and treat yourself to an inexpensive Michelin-star meal before they realise that their excellent food will sell at higher prices as well.