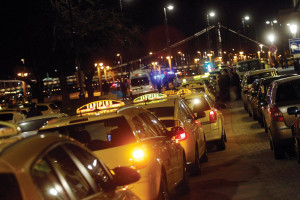 Uber, for the uninitiated, is an “uber”-successful American tech company that connects users with amateur drivers; usually at a fraction of the cost of a taxi ride. Last week, in response to the American tech company’s announcement of free Uber rides in Budapest for any trip under HUF 3000 over the weekend, dozens of Budapest taxi drivers gathered at Heroes Square to make a show of protest by driving together along Andrássy út, through central Pest to Várkert Bazár on the Buda side.
They argued that the American company is not required to adhere to the strict rules which regulate Budapest’s taxi services. In particular, they noted that Uber advertises a base fare of HUF 300 HUF and a HUF 130 kilometerage fee – far lower than the HUF 450 base fare / HUF 280 kilometerage fee that Budapest taxi companies are required to follow.

How does Uber work and why is it popular?

The company offers a mobile application – free to download – that connects users with amateur drivers who have registered with the service. In addition to fees that are significantly lower than standard taxi fares, Uber maintains it offers the quickest pick-up rate in the business.
In the six months since the services were launched in Budapest, and despite its increasing awareness and popularity, the company insists it has reduced the average waiting time to 4.5 minutes (from 6.5 minutes) and will not be content until it reaches about three minutes. Customers are even able to track their Uber taxi on their mobile phone as it is en route to pick them up. The company collects 20% of every fare, which has turned into a very lucrative business for the American start-up.
Named 2013’s Tech Company of the Year by USA Today, Uber now operates in more than 200 cities in more than 50 countries worldwide and is estimated to be valued in excess of USD40 billion.

How is Uber even legal?

The legality of the service is being questioned in nearly every market it operates, including its home state of California. Most legal questions surround unfair business practices, passenger safety and whether the company even meets local taxicab legislation.
For example, Budapest taxi drivers pointed out that Uber here has ignored the mandatory fares set out in a 2013 government decree, and the company continues to disregard the legislation’s strict requirements for vehicles and drivers designed to protect passengers.
The protest in Budapest is just the latest in a series staged against the company in places such as Germany, France, Italy and England. In fact, India has banned the service in two cities, Spain has banned it altogether and countries as far-flung as Canada, Thailand, South Africa and Australia have all raised regulatory opposition by legal or legislative means.

What’s next for Uber in Budapest?

Like elsewhere in the world, Uber is not likely to be going anywhere anytime soon. With its vast financial resources and immense popularity among users, the company has instead focused its efforts on having local legislators set up new regulatory frameworks to allow the company to legally compete with the traditional taxicab industry.
This is unlikely to sit well with Budapest’s taxi operators, however, as the over five dozen that gathered for last week’s protest insist that if their concerns continue to go unaddressed, they will return to block Budapest traffic during this Friday’s rush hour.
While this form of protest will surely get the issue noticed among Budapesters, it seems unlikely to daunt a company that has endured much larger protests in much larger cities for years.